A series where I post some thoughts about favorite cards. Previous cards in the series are available here.
The man featured on today's card is an absolute legend in my book. Many of you likely know a thing or two about him—if not from what you may have learned in school, then from numerous books and television documentaries about him. (The PBS series about some of the key members of the family is worth a watch.)
And as card collectors and sports fans, you might also know this man from a portion of a certain speech he gave that's been quoted by a few athletes over time, none bigger than Tom Brady.
The full speech is titled "Citizenship in a Republic", and the entire thing is powerful. I'll add a quote here from the specific portion that's so popular with athletes. After reading it, I think you'll see why.

"It is not the critic who counts; not the man who points out how the strong man stumbles, or where the doer of deeds could have done them better. The credit belongs to the man who is actually in the arena, whose face is marred by dust and sweat and blood; who strives valiantly; who errs, who comes short again and again, because there is no effort without error and shortcoming; but who does actually strive to do the deeds; who knows great enthusiasms, the great devotions; who spends himself in a worthy cause; who at the best knows in the end the triumph of high achievement, and who at the worst, if he fails, at least fails while daring greatly, so that his place shall never be with those cold and timid souls who neither know victory nor defeat."

Softball season just started over here, and I know I'm ready to slug some hits and get dirty in the field.
No more beating around the bush, though. Here's the man himself, on cardboard. 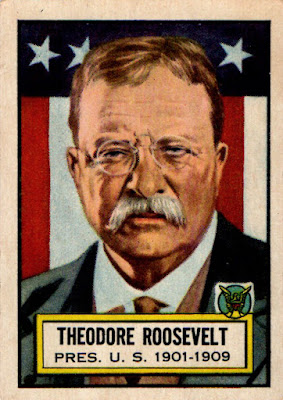 This Theodore Roosevelt card is one of the bigger hitters in the 1952 Look 'N See set, but you know what? I'd hardly purchased any cards for my collection in 2021, and I definitely wanted a copy of this one, so I found a decent deal online and went for it.
What pushed me to the point of purchase, however, was not anything I've mentioned above. It was a result of reading a book that Roosevelt wrote a few years after his second term in office called Through the Brazilian Wilderness.
Accepting an invitation from some highly regarded Brazilian leaders and naturalists, Roosevelt and his son Kermit would travel to the country and help chart some of its unexplored areas on foot and by dugout canoe, cataloguing some never-before-seen animal, insect, and plant species along the way.
It was a monumental task. The team would have to venture down uncharted rivers (including one called "The River of Doubt"), fend off snakes and swarms of insects, endure poor weather, rapids, near starvation, injury, sickness, the whole nine yards. And Roosevelt was in his mid-50s by then.
But his vigor remained. Just read this statement from the man regarding the journey he and his American-Brazilian team completed. It's one of my favorites in the entire book.

No man has any business to go on such a trip as ours unless he will refuse to jeopardize the welfare of his associates by any delay caused by a weakness or ailment of his. It is his duty to go forward, if necessary on all fours, until he drops.

And there were times in the journey when they really were pushed that far. Here's another excerpt:

Kermit's experience in bridge building was invaluable in enabling him to do the rope work by which alone it was possible to get the canoes down the canyon. He and Lyra had now been in the water for days. Their clothes were never dry. Their shoes were rotten. The bruises on their feet and legs had become sores. On their bodies some of the insect bites had become festering wounds, as indeed was the case with all of us. Poisonous ants, biting flies, ticks, wasps, bees were a perpetual torment. However, no one had yet been bitten by a venomous serpent, a scorpion, or a centiped, although we had killed all of the three within camp limits.

I think people were indeed tougher back then.
But let's get back to the card now. Here's the text and design on the reverse: 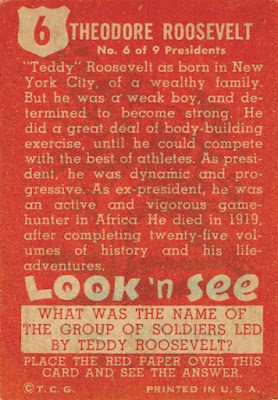 I might be a little partial because Mr. Roosevelt is such an icon to me, but the motivation I receive from reading about him seems almost limitless. Here's one more quote from "Citizenship in a Republic".

To say that the thriftless, the lazy, the vicious, the incapable, ought to have the reward given to those who are far-sighted, capable, and upright, is to say what is not true and can not be true. Let us try to level up, but let us beware of the evil of levelling down. If a man stumbles, it is a good thing to help him to his feet. Every one of us needs a helping hand now and then. But if a man lies down, it is a waste of time to try to carry him; and it is a very bad thing for every one if we make men feel that the same reward will come to those who shirk their work and to those who do it.

Strong points for the world in which we currently live.
Now it's time to decode the card back. The text box at the bottom of the card asks, "What was the name of the group of soldiers led by Teddy Roosevelt?"
Know the answer?
Okay, time to place my digital red cellophane paper atop the card. 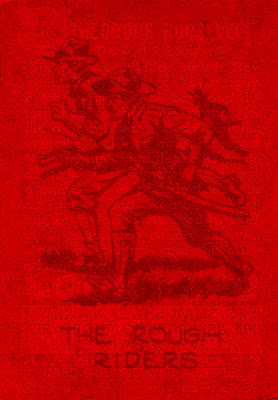 The Rough Riders. Bully for the whole unit. Bully for Colonel Roosevelt. Bully for all of you readers and collectors.
And for continuing to motivate us to get off our duffs and accomplish great things—more than 100 years now since he first spoke those words quoted above—1952 Topps Look 'N See #6 has a place in my box of favorites.
at April 03, 2022