Question:
Do kids still hang posters on their walls? Posters of music groups? Cars? Celebrity crushes? Pro athletes?
Well, I know I had at least a couple of posters of baseball and hockey players on my walls over the course of my childhood. If you did too, you might remember the feeling you got when you found a display like this one in a retail store: 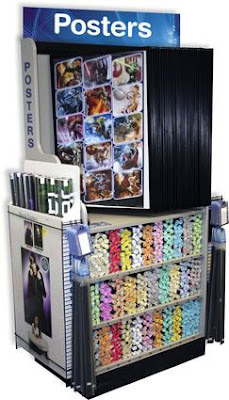 You'd run over there and flip across those frames. If you found a poster featuring one of your favorite players, you'd have to follow the letter/number code on the frame down to the storage racks underneath, and hope the particular slot you needed wouldn't be empty. (The display shown above seems very well stocked.) Then you'd hope mom or dad would treat you to one.

Being a baseball-loving kid who grew up in the 1980s, the poster brand I remember the most is Starline. Have a look at these three all-time great hitters and tell me if the poster style looks familiar:

It's a classic memory for many kids of the era, I'm sure. But the thing is, the images you see above are not posters. They're trading cards!
That's right. I recently discovered that Starline put out trading-card versions of their posters in 1990.
Most of the sets were 7-card promos that were sponsored by either McDonald's, Burger King, 7-Eleven, Coca Cola, or Domino's. The bigger one is the 1990 Starline Long John Silver's set. There are 40 cards in that one.
But the checklist is rather wacky. Of the 26 MLB teams that existed in 1990, you'll only find 14 represented. And across those 14 teams, there are only 18 total players featured. That means quite a few players were given two (or even three!) different cards, while other players you'd imagine should have gotten a card weren't given any.
Take the Royals, for instance. They had two cards in the 40-card set. Do you think you'll find legendary Royal George Brett on one of them?
Nope! Both cards feature Bret Saberhagen.
Let's get to a card back now. 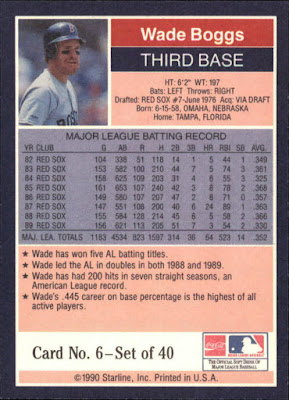 They're nicely done and neatly arranged, which reminds me a little bit of the card backs that the Score company was creating back then.
Note the clunky writing of the blurbs, however. Every sentence begins with the player's first name. My fifth-grade English teacher would have never let me get away with that kind of thing.
Regardless, this Starline set provided me with an immediate sense of nostalgia when I stumbled across the checklist a few weeks back. I'm happy to have Mattingly, Gwynn, and Boggs in my collection now for future doses of that same nostalgia.
Did any of you readers who grew up in the '80s or '90s have Starline posters? (I had New York Yankee third baseman Mike Pagliarulo and Montreal Canadien goaltender Patrick Roy.)
Share in the comment section, and thanks for reading!
at February 07, 2021