I was a young collector when these 1991-92 Bowman hockey cards were released. Any amount of foil on a card was a pretty big deal back then, and those three pucks stamped in gold foil on the top corner of these special "hat trick" cards earned some coolness points with collectors, for sure. What can I say? We were easy to please back then.
But this post isn't really about the 1991-92 Bowman hockey set. Another type of hat trick was scored recently, in an anniversary sense of the expression.
This blog has turned three years old!
And just like last year's anniversary, I'm very happy to say that I've again maintained the goal of posting new content once a week, every Sunday.
It was a big year. Along with extending the streak, I added a bunch of fun custom cards to the list, and debuted the print versions to boot.
All you readers, commenters, and fellow bloggers have continued to inspire me and make the effort worthwhile, so I'm sending a big thank-you all around. I look forward to year number four, and I've got more custom cards and other ideas lined up. I'm also going to push hard to keep the every-Sunday streak going throughout the entire year.
But let's get back to hat tricks for a moment. Because this is a trading card blog, let's link a few more cards to the feat of scoring three goals in a game.
Here are the three players who've scored the most hat tricks across their NHL careers:

Gretzky had 50, Lemieux had 40, and Bossy had 39.
Fifty hat tricks. Think about it for a minute.
That means 150 of Wayne Gretzky's 894 career goals came on nights when he scored a hat trick. I mean c'mon, 150 goals total for an NHL career is nothing to shake a stick at. And Gretzky put up that many on hat tricks alone.
As for Mike Bossy's 39 hat tricks? Here's something that will help you understand just how incredible that number really is:
Wayne Gretzky's 50 hat tricks came across 20 seasons.
Mario Lemieux's 40 hat tricks came across 17 seasons.
Mike Bossy's 39 hat tricks came across only 10 seasons.
Additional factoids:
Most career postseason hat tricks
Wayne Gretzky: 10
Jari Kurri: 7
Maurice Richard: 7
Dino Ciccarelli: 6
Most hat tricks in a single season
Wayne Gretzky: 10 (twice)
Mike Bossy: 9
Mario Lemieux: 9
Brett Hull: 8
Quickest hat trick
Bill Mosienko of the Chicago Black Hawks turned the trick in a total time of 21 seconds against the New York Rangers on March 23, 1952. Wow!
Back to the anniversary now. I'd like to do a giveaway like I did for last year's anniversary, but over the past few months I've done a few giveways, and I think I'm spent for ideas and material. However, there will be at least a couple of opportunities for you to claim some cards over the first few months of the new year, so please do stay tuned.
Thanks again for spending some time here on the blog. Let's look forward to a new year of blogging and collecting!
at December 26, 2021 14 comments:

Okay, the title of this blog post doesn't exactly represent the first "perk" that would cross the minds of most young, future pro hockey players. But it is a perk, isn't it?
There are many beautiful places across the United States and Canada, and professional hockey players, with all the road games they play throughout each season, can certainly tell you a thing or two about numerous cities north, south, east, and west.
However, as true as that might be, all of these players have a home team. And a home city. That means they only stay in each road city for a day or so before moving on to the next one, or heading back home for a few games.

But what about the rare players who've really experienced North America? The guys who've not only played in various cities, but also lived in them throughout their careers while playing for different teams?
Well, one man stands on top of that hill. It's Mike Sillinger. 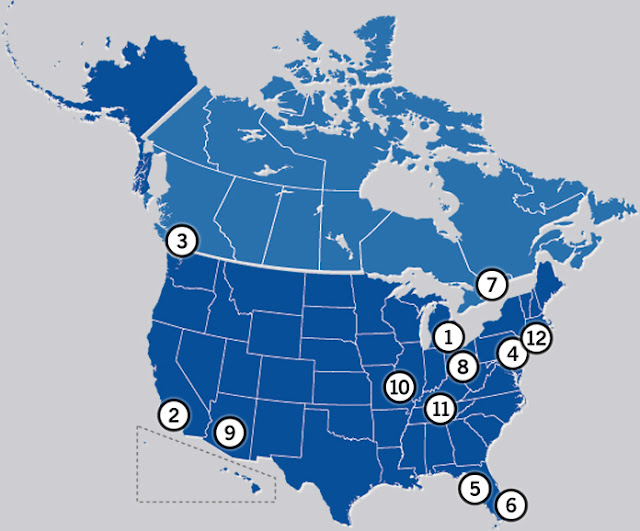 But now scroll back up to the stats for a moment, and notice the points-per-game breakdown per team. You'll see just how consistent Mr. Sillinger was throughout his career, despite the different teams, offensive and defensive systems, and line mates. It goes without saying that the guy was bright, had a great work ethic, and perhaps an even greater determination to succeed.
Here are some other interesting facts and figures:
So here's to Mike Sillinger. What a terrific career across 12 North American cities.
And if you ever need some good recommendations for restaurants, hotels, or attractions in any of them, you know who to ask.
at December 19, 2021 6 comments:

The big winner of episode 20 was Grant Fuhr.

Three hockey dudes just hangin' around on their cards. At least Gaston looks like he's getting ready for a face-off.
Let's find out more about them from the back of their cards. 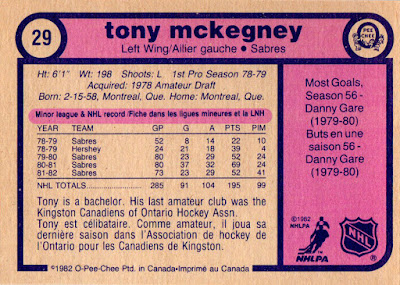 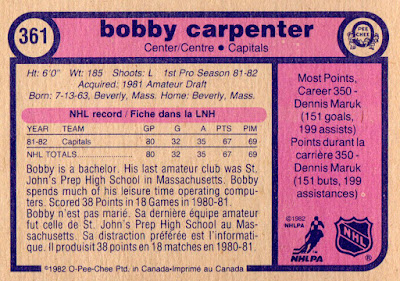 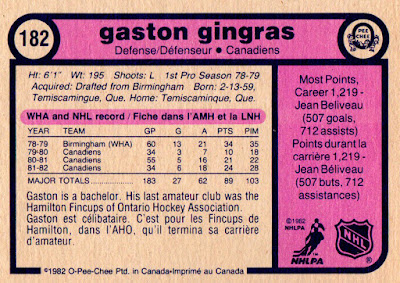 I think once Bobby the computer nerd started geeking out about his Commodore 64, Tony and Gaston decided to tune out, and didn't share any hobbies.
Nevertheless, we've got to pick a winner for a date with our lovely lady this week. Who will it be?
Bachelor number 1: Tony McKegney, who's been putting up some solid numbers in Buffalo.
Bachelor number 2: Bobby Carpenter and his computers.
Bachelor number 3: Gaston Gingras, who could easily pass for a lumberjack in the forests of Témiscamingue, Québec, with that name and that mustache.
at December 12, 2021 8 comments: 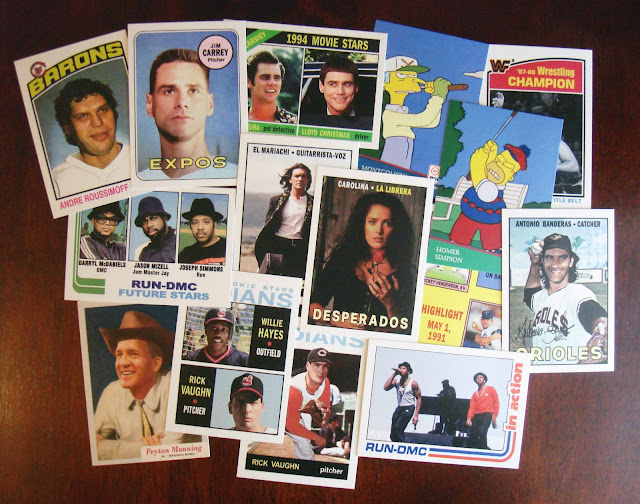 The 2021 custom cards have arrived!
I finished the year with a total of 16 unique custom cards, not including the 1980-81 Topps hockey scratch-offs. If you do include those, it brings the total to almost 30. That means I put out more customs this year than ever. (22 designs in 2020, 9 designs in 2019.) I feel good about that.
Here's a closer look at a card front and a card back: 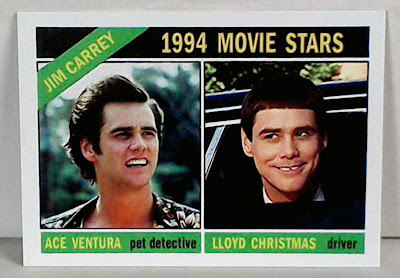 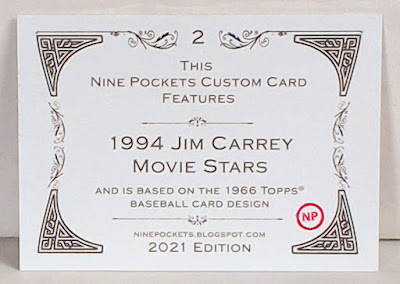 For continuity, I used the same template that was used for the 2019 and 2020 card backs, changing just the ink color to distinguish this year from the others. In 2019, the ink on the back was a dark gray. In 2020 it was indigo blue. This year, it's maroon.
The new cards are available for sale on my bonanza store and eBay store, but just as I did with the release of the 2019s and 2020s, I'd like to get some of these 2021s into the hands of you fellow collectors, free of charge. So let's do a giveaway for the first 15 commenters.
Here's what to do:
(1) Go to my custom card gallery and find three cards you'd like from the 2021 list. The only options currently unavailable are the Samurai Jack menko and the 1980-81 Topps hockey scratch-offs. (The scratch-offs pose a rather complex printing challenge that I haven't tackled to this point, but might try to tackle at some point in the future.)
(2) Come back here and leave a comment that includes your three card choices, plus one consolation choice just in case every single commenter wants the same three cards and I start running out of stock.
(3) If you haven't sent me your mailing address during a previous giveaway, or if your address has changed recently, please email me with that information. A link to my email address appears on my blogger profile page. You can also contact me on TCDB.
And that's all you have to do.
Thanks so much to all you readers, fellow collectors, and fellow bloggers for spending some time here at Nine Pockets. You guys continue to provide great inspiration and entertainment, and I look forward to getting these custom cards out to you.
at December 05, 2021 20 comments: