Turning Two (And a Giveaway)


Back in 1962, I bet kids were really excited to find this card in packs. Using their imaginations, they'd be able to scan through the four frames and watch Tony Kubek turning a double play. Then they could rewind the action and run the instant replay as many times as they wanted.

And that imagination was important, because instant replay during televised sports broadcasts didn't occur until 1963, the year after Kubek's card was released. In other words, maybe we're a bit spoiled with all the camera angles and super-slow-mo replays and graphic overlays we receive during modern sports broadcasts. Spoiled, or bombarded, depending on how you look at it.

But Kubek "turning two" on that card is just a lead-in to the real reason for this post. Something else is turning two, in an anniversary type of way.

And I'm happy to say that for a second consecutive year, I managed to hit the mark of posting new content once a week, every Sunday, throughout the year (with the exception of the 1980 Miracle on Ice entry, which I posted on a Saturday to match the 40-year anniversary of that event). The goal is to stick to the every-Sunday schedule again for year three.

As a way of thanking all of you for reading and commenting throughout the past two years, I'd like to offer up some prizes from my collection. Even if you're a long-time reader, first-time commenter, don't be bashful about staking a claim. Just let me know which one you'd like in the comment section below.

One prize per person, first to claim the prize gets it, so prepare your typing fingers. Here they are: 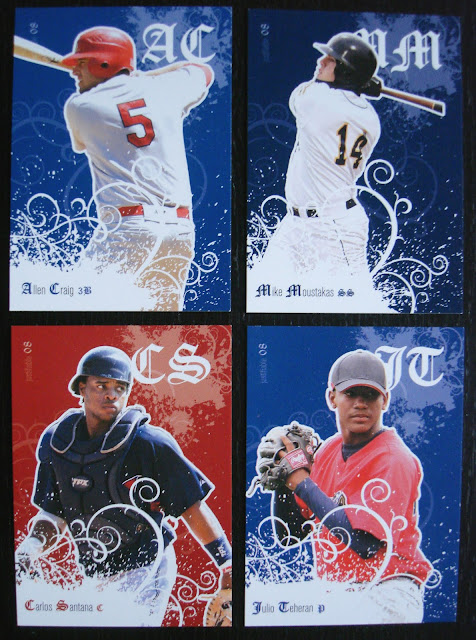 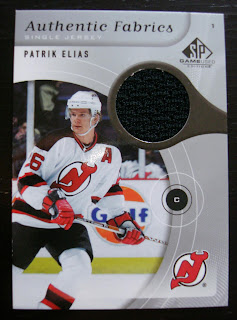 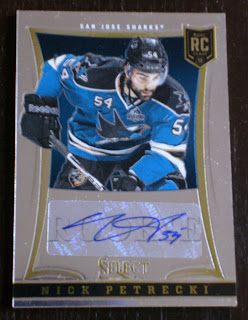 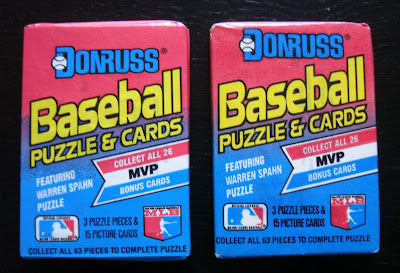 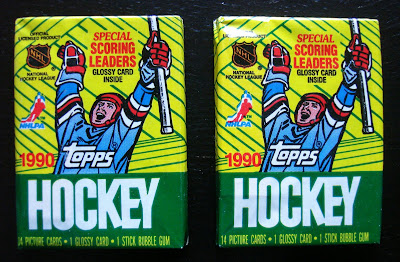 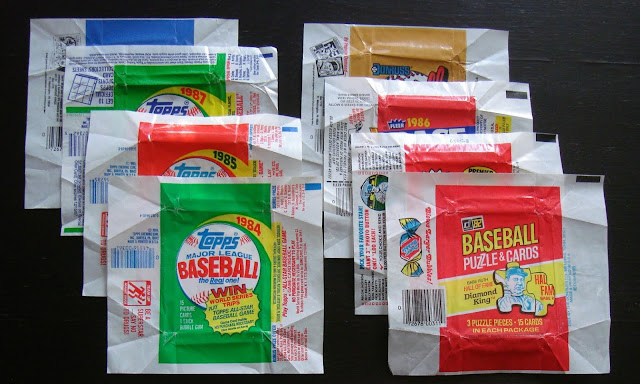 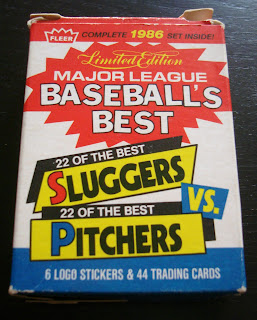 (10) Starter Set of 1997-98 Pacific Paramount Hockey [CLAIMED]
(You'll get 100 cards total, which is half the set. Included are stars like Gretzky, Jagr, and Thornton.) 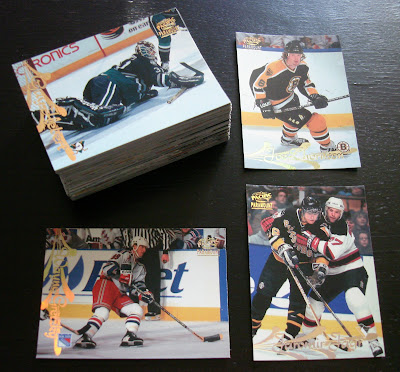 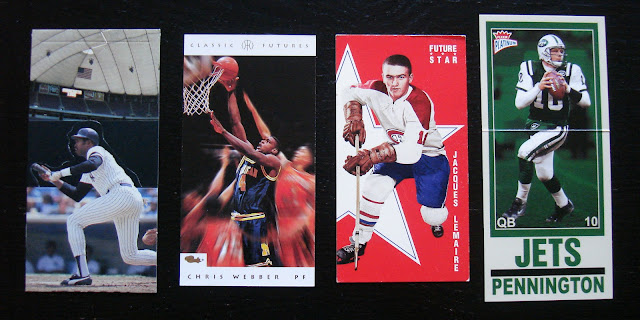 (13) Group of Basketball Cards
(About two dozen total. Most from the 1990s, plus a few modern cards.) 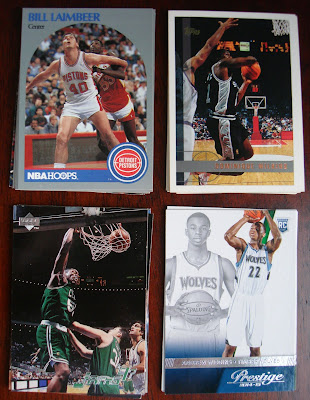 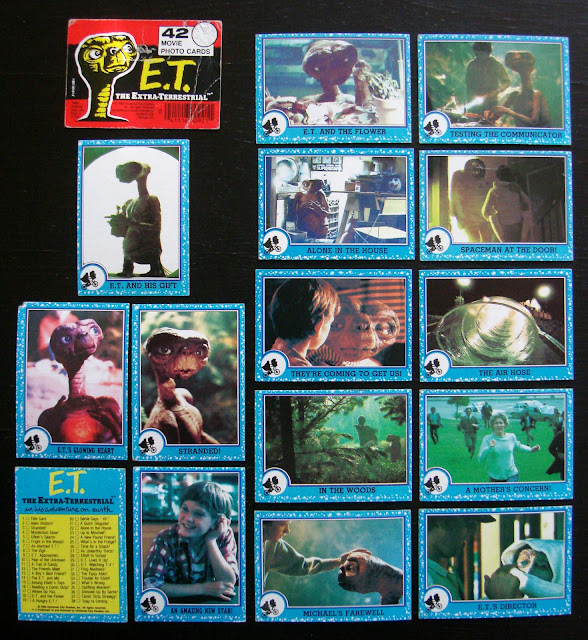 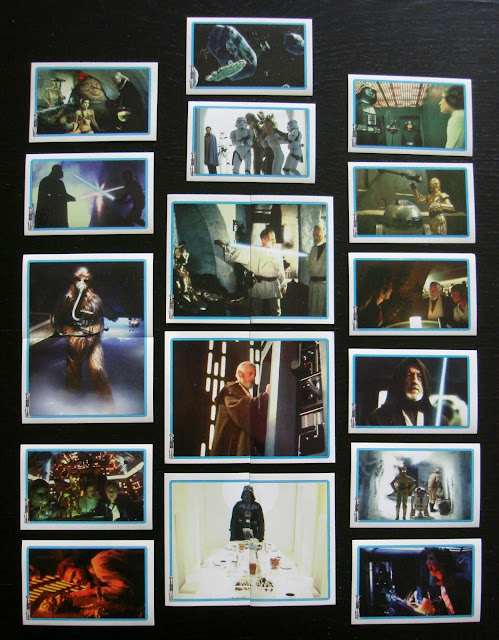 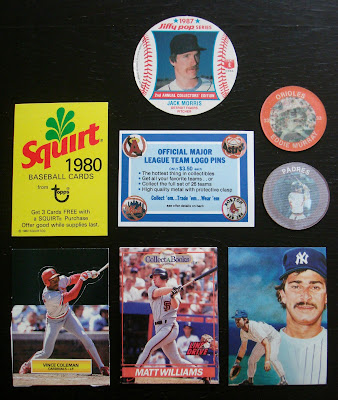 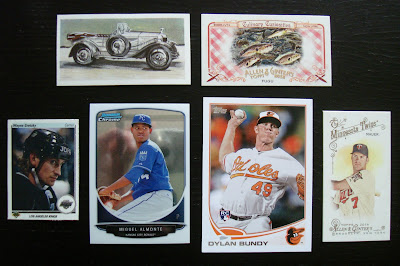 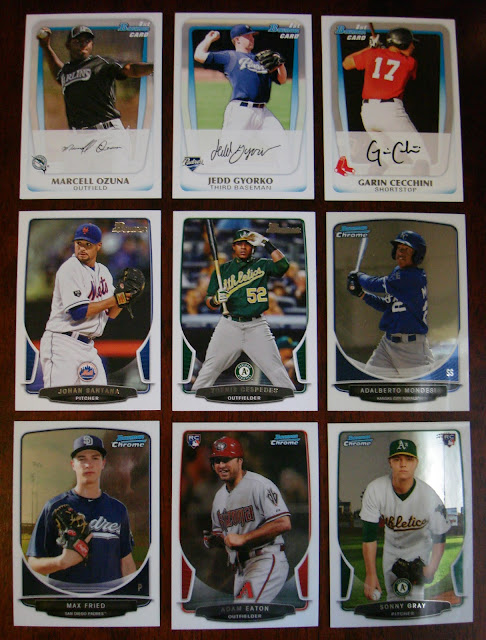 (19) Packet of New York Islanders Media Notes from 1987 Playoffs
(Includes rosters, stats, player notes, and more that members of the Islanders' TV and radio broadcast teams would have used during a playoff game against the Washington Capitals on April 12, 1987. More than a dozen pages in all.) 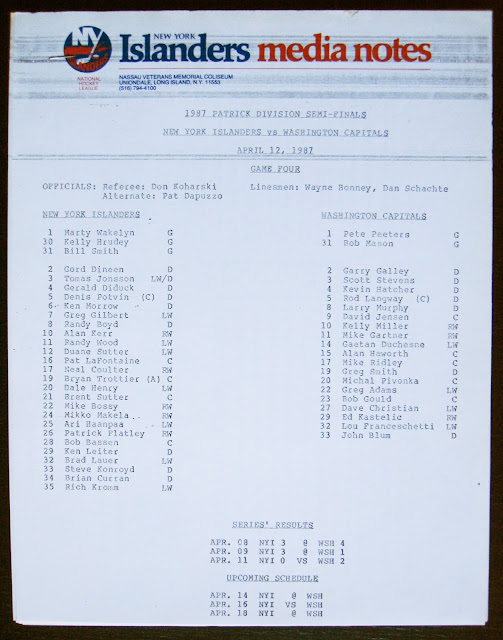 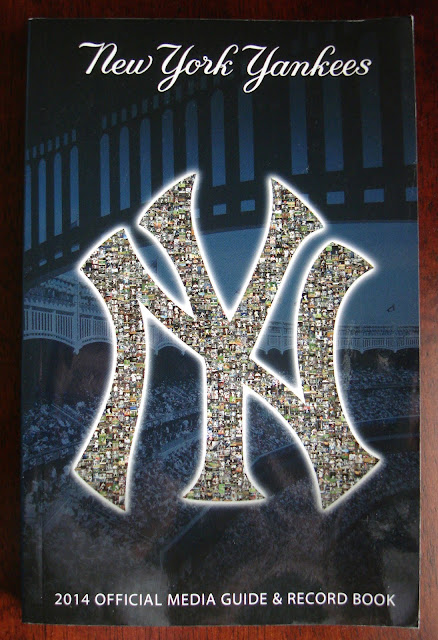 Stake your claims in the comment section. You can send me your mailing address in either of these ways:

(1) Contact me on the Trading Card Database through my profile page.

(2) Email me using the link in my profile here on blogger.


Thanks very much again for spending some time here over the past two years. I've really enjoyed the interaction. If we've traded some cards or had conversation outside of the blogosphere during that time, a big thank you for that, too.

Have you ever wondered why some story ideas turn into smash hits while others don't?

The story itself has to be a good one, of course. But there must be other factors, too, like having a connection in the industry, or presenting the idea to the right person when they're having a good day. And part of it might simply be a matter of timing. (Who knows if that same story idea would have taken off had it launched a year earlier, or a year later?)


So can a good-looking line of toys, and an arcade cabinet that has four joysticks, one for each turtle, so you and three of your friends can fight Shredder and his goons together.

And if you're a card collector, a set of trading cards might seal the deal. 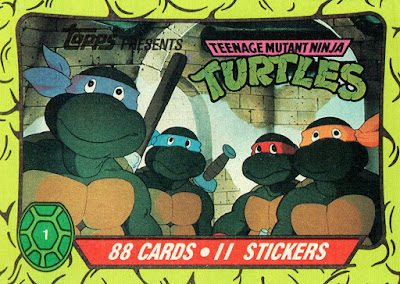 I was a middle-schooler when the Turtles took off, so I was just a little too old to really be swept up by the phenomenon. But it sure was a phenomenon.

For those around my age, it's safe to say it was the biggest thing since The Transformers. If you're from previous generations, I can imagine it was as big as Jonny Quest, Speed Racer, or the Super Friends. And for those of you a little younger, think Dragonball Z or Power Rangers. 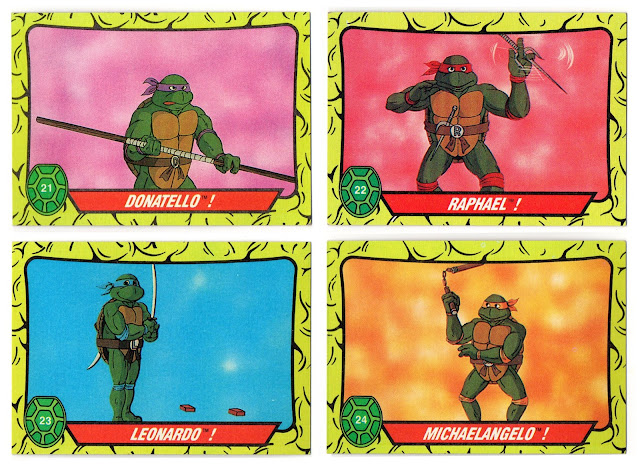 So why did I, a kid who wasn't really into the Turtles, decide to put this set together after all this time? As is often the case, it stems from a moment of nostalgia. A few months ago I found some of these cards in an old box, and they brought back the following memory.

One weekend during that era of turtle-mania, dad and I went to a trading card show at a big banquet hall/catering hall called Leonard's. We started to browse around the many, many tables together, and soon realized it would be a long journey. 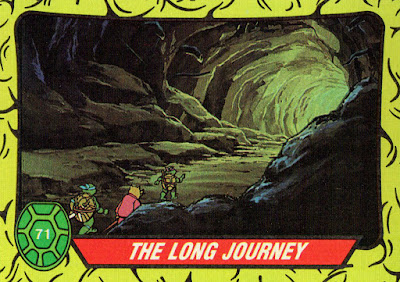 So, we devised a plan to split up in order to cover more ground, agreeing to meet back up at a designated location an hour later in order to share our findings. Looking back now, maybe we should have fueled up with some pizza first thing that morning. 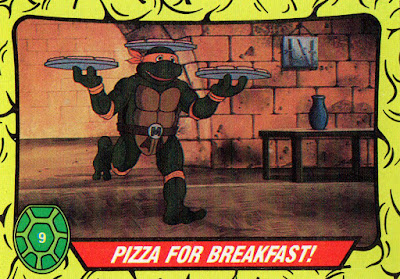 I arrived at the meeting spot first, and waited for dad. Just a few minutes later I saw him walking toward me with a big grin on his face. He reached into a bag and pulled out a sealed wax box of Teenage Mutant Ninja Turtles trading cards he'd purchased for less than 10 dollars. 48 packs of Turtle Power for such a small price? This was our kinda card show. 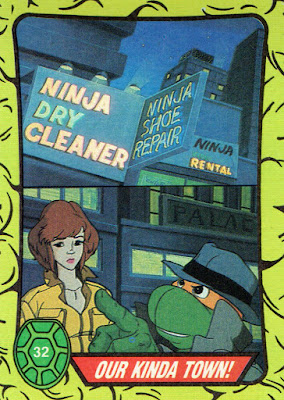 I think we put together more than one complete set from those packs. I gave one of them to my younger brother, who was just a toddler at the time. Fast-forward about 30 years and he's still got it, but I couldn't tell you where the other set went. So, I thought it would be fun to put one together to replace it.

Thankfully, one of the nice things about oddball sets from the time is that quantities are plentiful, so you have a good chance of finding a trading partner who'd be more than happy to send you a stack (to help get rid of some of their clutter, if for no other reason). And so after just a few trades, I've got the whole set again. You could say I'm savoring it. 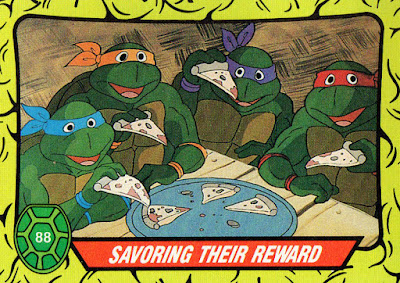 The illustrations on these cards are taken directly from the animated show that got its official start in October of 1988. There are 88 cards in series 1, and each card advances the story of the Turtles.

Good points scored for the design here. Note the turtle-inspired borders on the front, and how the card number on the bottom left (inside a turtle shell) ties into that theme. The text box across the bottom—white letters on a red background—stands out nicely.

I also like how the back of the card provides a detailed description of what you're seeing on the front.

There's also some good action captured in this set.

As well as some clear shots of the major players.

In each wax pack you'd get 5 cards, 1 sticker, and 1 stick of bubble gum. There are 11 different stickers. Here's an example. 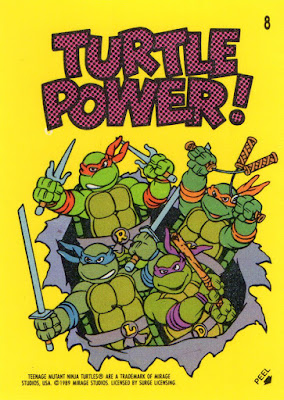 Flip over the stickers and you'll find a puzzle piece. Put 'em together, and this image will be revealed. 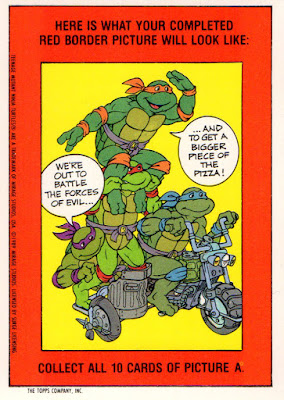 And there you have it. 88 cards and 11 stickers, for a total of 99 pieces of cowabunga goodness. (That's the perfect number to fill some 9-pocket pages, by the way.)

This is by far the goofiest set of cards I've ever completed, but for the dose of nostalgia it was completely worth it.

Were any of you readers swept up in Turtle-mania back then? Did you have a favorite character?

GIVEAWAY REMINDER: The Nine Pockets two-year giveaway is next Sunday. Tune in and choose a prize!

Imagine you're a kid growing up in late-1970s Québec. You and your older brother both love playing hockey, and you're both developing quite the set of skills.

Childhood turns into adolescence, and by the time big bro reaches his late teens he becomes so skilled that he's selected to play for the 1982-83 Canadian National Junior team alongside future legends like Mario Lemieux and Steve Yzerman. Big bro is so admired by professional scouts, in fact, that later in the year the Hartford Whalers select him second overall in the NHL Entry Draft.

So what do you do? Motivated by your brother's success, you keep pushing. You play so well that a few years later your talents earn you a spot on the 1986-87 version of the Canadian National Junior team, skating alongside other future legends like Brendan Shanahan and Theo Fleury. But that's not all.

Later that same year the Buffalo Sabres select you first overall in the NHL Entry Draft.

It goes without saying that no two brothers have been drafted that high in NHL history. Mom and dad must have given each other a high-five.

Here are their two boys, looking good on cardboard.


Big bro Sylvain really hit the ground running in Hartford. After his first season he received notable consideration for the Calder Trophy, awarded to the rookie of the year. Only Tom Barrasso (the winner) and Steve Yzerman received more votes. And Sylvain's success didn't stop there. Just have a look at the progression across his first three NHL seasons:

That third season he topped players like Ron Francis, Ray Ferraro, and Kevin Dineen. Unfortunately for Sylvain, injuries really seemed to limit his playing time from then on. Across the next nine campaigns, he averaged only 50 games per season. After Hartford he'd suit up for the Devils, Canadiens, and Senators. Then he finished up his career with a few seasons in the European professional leagues.

I was too young to see much of Sylvain throughout those early years in Hartford, but as for younger brother Pierre? I got a great look at him during his years on Long Island.

And my goodness, what a naturally gifted player. He was one of those guys who didn't seem to exert much effort, but still skated faster than other players and zipped wrist shots into the net from everywhere.

Just consider his stats while he was with those Islanders. In 255 games he scored 340 points (147 goals, 193 assists). That's outright phenomenal.

Across his career he played for the Sabres, Islanders, Canadiens, Blues, Stars, and Avalanche, and had terrific success with just about all those teams. And that's not to mention some good playoff runs, most notably with the Islanders and St. Louis. Pierre put up a total of 97 points (35 G, 62 A) in 109 playoff games.

Let's have a look at some numbers for both brothers.


You can see from those single-season numbers that both brothers were quite skilled. And here's a fun fact: They both had the experience of playing for their hometown Montreal Canadiens! (Though not at the same time.)

As for Pierre in particular, I don't know how he's not in the Hall of Fame with those career numbers. But maybe that's a subject for a separate blog entry.

For now, let's salute the Turgeon brothers for two terrific careers, and for setting a draft pick record that might never be broken. Actually, the only way it can be broken is if two brothers are both selected #1 overall in separate drafts. Seems like a tough ask, especially with the international talent pool these days.