40 years ago today, this was the scene in Lake Placid, New York: 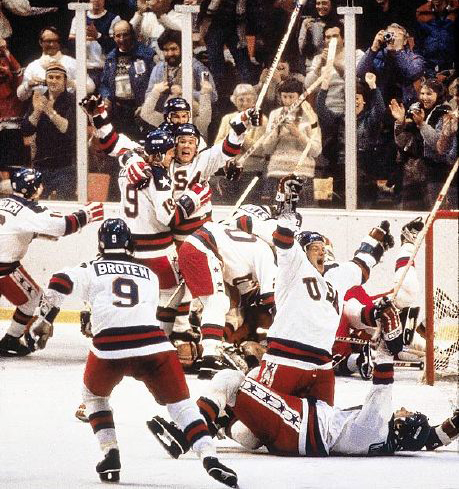 The next day, this was the headline in the newspaper: 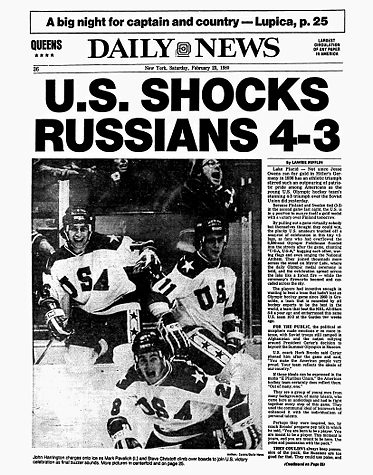 When The Miracle on Ice happened, I was barely a toddler. I didn't even get into the sport of hockey until I was in high school in the 1990s. But the story of this group of college kids, their coach Herb Brooks, and their collective accomplishment still grabs me pretty hard. It always has. It probably always will.


And I think that's really saying something. Time goes on in sports, and often there aren't many details of a championship that cement themselves in our minds. Sometimes we won't even recall who won the championship when we think back to particular seasons. But 40 years later the Miracle is still talked about, largely because it went well beyond the sport of hockey and the Olympic games.

The Cold War and corresponding arms race between the United States and the Soviet Union had gotten a little more hostile and nuclear, and the world was watching anxiously. The tension couldn't help but spill over to Lake Placid. After all, the world was watching the Olympics, too. And although it might seem like an exaggeration to say this now, back then it was "us versus them", and many Americans felt like the US team almost had to win for the sake of the free world.

To provide just one example of the impact the victory had, there are stories of people across the States who were listening to the game on the radio in their cars, and when the final buzzer sounded they pulled over, got out, and with tears of joy in their eyes began to embrace complete strangers who'd also pulled over—all to the sounds of even more cars passing by and honking rhythmically, U-S-A! U-S-A! U-S-A!

And to cap off this remarkable story, two days after the Miracle, the US team went on to defeat Finland to claim the Gold Medal.

Because of all this, and because this is a trading card blog, I'd like to show the first hockey card of each player from that US Olympic team who went on to play in the NHL. We'll go in chronological order. 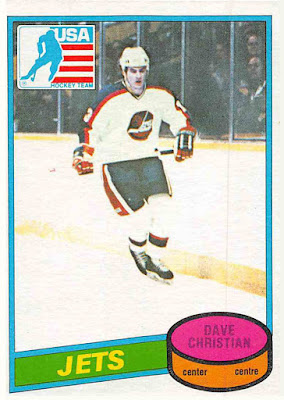 Christian played for 5 teams across 15 seasons: Winnipeg, Washington, Boston, St. Louis, and Chicago. His best season was 1985-86 with Washington (80 GP, 41 G, 42 A, 83 PTS). Remarkably, Dave's father Bill and uncle Roger were members of the 1960 US Olympic hockey team that also won a gold medal. The family owned and operated the Christian Brothers hockey stick company for many years.

Fun fact: Similar to a few of the other Olympians, Dave Christian began playing for his NHL team just a few days after the Olympic tournament ended. And on his very first shift—seven seconds into it—he scored his first NHL goal. As of this writing it's still a record for the quickest goal into an NHL career. 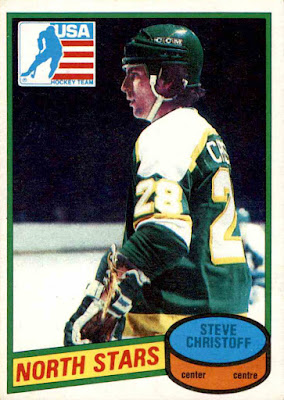 Christoff played with Minnesota, Calgary, and Los Angeles across five NHL seasons. It must have been amazing to suit up for his hometown North Stars right after the Olympic tournament. Along with Olympic teammate Dave Christian, Christoff received some consideration for the Calder Memorial trophy. (Awarded to the rookie of the year.) 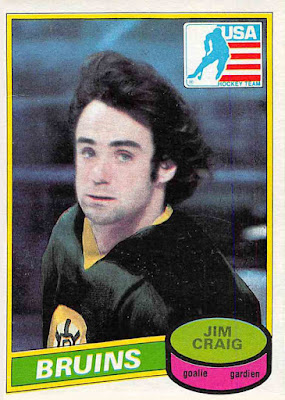 Craig was the big hero in goal for the Olympic team, starting every game and standing tall against some incredible international talent. After the tournament he'd play parts of three seasons for Atlanta, Boston, and Minnesota.

As you've noticed by now, the 1980-81 cards for each Olympian received the special "USA Hockey Team" stamp—on the Topps and O-Pee-Chee versions. It certainly provides some indication of how big the US victory was. 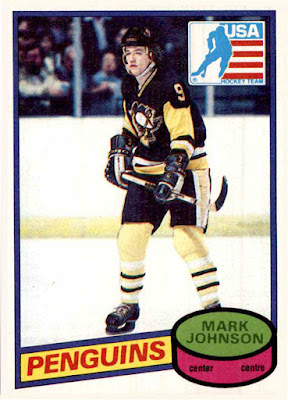 Johnson was a talented forward who bounced around the NHL for 11 seasons and had success wherever he went, reaching the 20- and 30-goal mark a bunch of times. He scored two goals against the Soviet team in the Miracle game. He also played for the US National Team in numerous World Cups and Canada Cups throughout the 1980s, putting up pretty good point totals there, too. McClanahan played for Buffalo, Hartford, and the Rangers across five NHL seasons. His best season was 1982-83 with the Rangers (78 GP, 22 G, 26 A, 48 PTS, 46 PIM). Guess who coached that team? Yep. Herb Brooks. Know who else was on that team? Fellow Olympic teammates Bill Baker, Dave Silk, and Mark Pavelich. 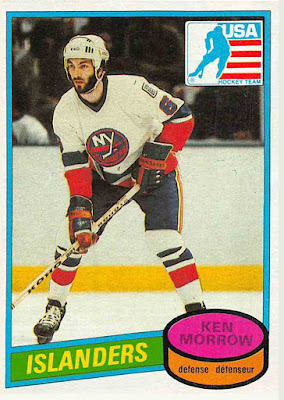 Morrow is the most decorated of this group—not for the personal point totals, but for the team accomplishments. How's this for a story: A few days after winning the gold medal in February of 1980, the NHL team that drafted you, the New York Islanders, calls and tells you they need another defenseman to shore up their blue line for their upcoming playoff run. You step into the lineup and play in the final 18 regular-season games, then blast through the playoffs and help your team win its first Stanley Cup. And then you'd win the next three Stanley Cups as well. The guy's feet probably never touched the ground from 1980 to 1984.

One personal stat I would like to point out is Morrow's career plus/minus totals. He's plus 142. That's top 60 all-time for defensemen. I know the legitimacy and value of plus/minus has been criticized over the past few years, and with reason, as it's not a perfectly accurate indicator. But still, if you're a defensive-minded guy like Morrow, it's a pretty good number, and still means you're doing well at preventing goals from going into your net while helping your team score into the other net. It's even more impressive considering Morrow accumulated that number across only 550 games.

You know who's got an even better career plus/minus? The next guy in our list. He's at plus 203. 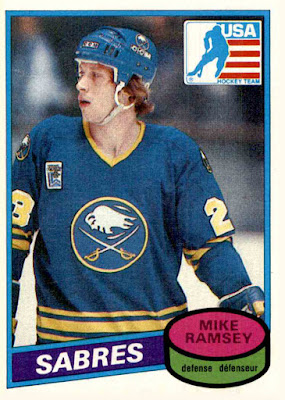 Ramsey is another member of the Olympic team who played in more than 1,000 NHL games. He suited up for 18 seasons total, mostly with Buffalo (then a couple with Pittsburgh and three with Detroit). Ramsey was selected 11th overall by Buffalo in the 1979 Entry Draft, and was talented enough to be named to four NHL All-Star teams.

While with Detroit, he was teammates with defenseman Viacheslav Fetisov, who was on the 1980 Soviet Olympic team. Oh, to be a fly on the wall when the two of them were reintroduced in that locker room. I wonder what sorts of conversations they had about their Olympic experience over the years. And speaking of his time in Detroit, if Ramsey could have just lengthened his career a few more months and stuck around for the 1996-97 season and playoffs, he would have hoisted the Stanley Cup with those Red Wings, and with Fetisov. 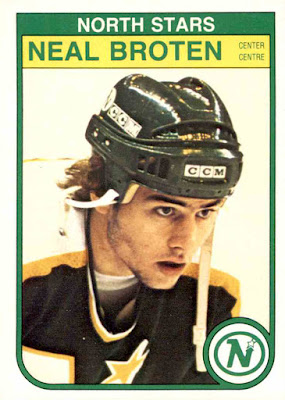 The third player on this list to have played in more than 1,000 NHL games, Broten logged 17 NHL seasons, 13 of those with Minnesota. He won the Stanley Cup with New Jersey in 1994-95, where he put up 7 goals and 12 assists in 20 playoff games. Four of those goals were game-winners.

Fun fact: Broten went back to college after the Olympics, helped Minnesota to an NCAA championship, and won the Hobey Baker award as the best NCAA hockey player of the year. That means he's an NCAA champion, an Olympic gold medalist, and a Stanley Cup champion. Ed Belfour is the only other person to have done that. Additionally, Broten is the only person to have won a Hobey Baker award, Olympic Gold, and Stanley Cup. 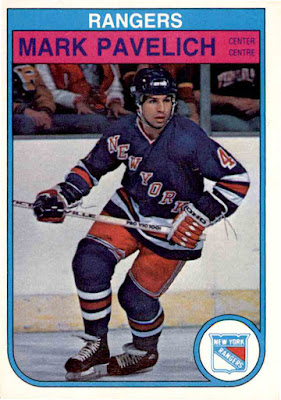 Pavelich was superbly talented, as evidenced by his near-point per game totals across his career. He played in 7 NHL seasons, 5 with the Rangers. Have a look at these goal totals in his first three NHL seasons: 33, 37, 29.

During the 1982-83 season he scored 5 goals in one game (and he's still the only US-born player to have done so). Injuries reduced his game totals and scoring totals after his first few seasons, however. 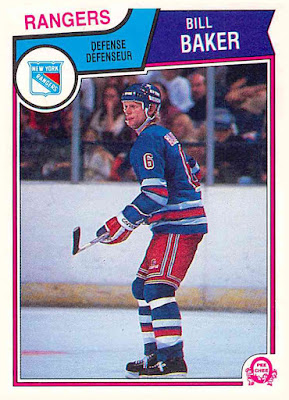 Baker suited up for Montreal, Colorado, St. Louis, and the Rangers. It doesn't seem like he got much of a chance to be an everyday player until he was reunited with coach Herb Brooks in 1982-83 with the Rangers. Perhaps unsurprisingly, he put up his best personal totals that year, playing almost a full NHL season for the first time (70 GP, 4 G, 14 A, 18 PTS, 64 PIM). 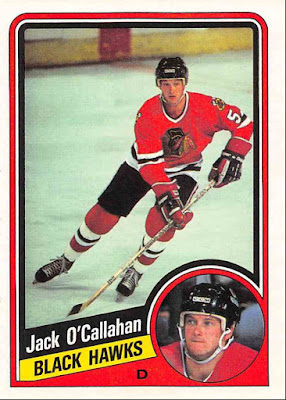 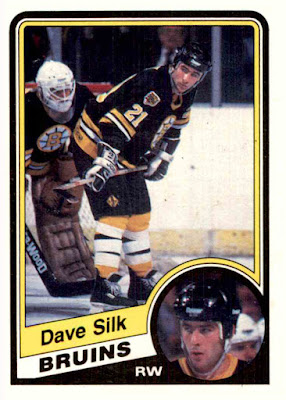 Silk was hampered a bit by injuries over his seven-year NHL career, but still played a respectable amount of games with the Rangers, Boston, Detroit, and Winnipeg. His best season was perhaps with Boston in 1983-84, where in only 35 games he scored 13 goals and 17 assists for 30 points.


Here are the team members who did not earn an NHL trading card:

Steve Janaszak, goaltender
Saint Paul, Minnesota / University of Minnesota
1980 Olympic Tournament: 0 GP
Played one game with the North Stars and two games with Colorado. Played in the minor leagues through the 1982-83 season.

Bob Suter, defenseman
Madison, Wisconsin / University of Wisconsin–Madison
1980 Olympic Tournament: 7 GP, 0 G, 0 A, 0 PTS, 6 PIM
Played for the US team at the 1981 Ice Hockey World Championships. In 1981-82 played one full season in the CHL with the Nashville South Stars.


I hope you can see that some of the players from the 1980 US Olympic Team had really great (and perhaps overlooked) professional careers. And for those who didn't make the NHL ranks, it wasn't the end of the world. The team was made up of humble guys who grew up in small towns or on farms and ranches, enjoyed playing hockey, and came together to be part of a magical experience. If playing in the pros didn't work out after that, they moved on with their lives. It adds another amazing note to the whole story.

If you want even more evidence of the scale of the victory, almost all 12 of the cards shown above mention something about the 1980 Olympics on the back.

On Jim Craig's card, for example: 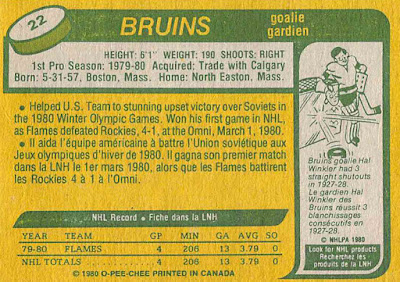 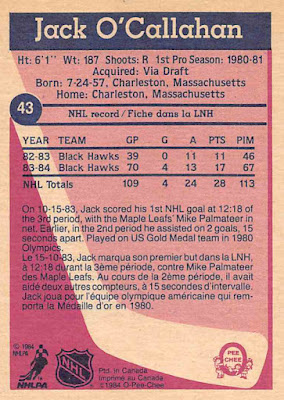 Played on US Gold Medal team in 1980 Olympics.


Finally, if you'd like some additional inspiration, I can make four recommendations:

(1) The 2004 film Miracle. Disney did an excellent job telling the story, despite some moments that were perhaps enhanced and "Disney-fied" a little bit. Kurt Russel did a fantastic job playing the role of coach Herb Brooks, and the game-action scenes throughout the film are really well done and quite realistic. A main reason is that the actors who portrayed the members of the team were accomplished hockey players themselves.

(2) If you want the story without Disney-fication, a great book is The Boys of Winter. Author Wayne Coffey delves much deeper into each player, their humble backgrounds, and how the team came together to carry out one of the biggest upsets and greatest sports stories of the 20th century.

(3) The December 22, 1980 issue of Sports Illustrated. Since 1954, the ultra-popular magazine bestowed a "Sportsman of the Year" award to one athlete. The Miracle on Ice was so special, however, that for 1980 the editors changed the title of the award to Sportsmen of the Year so they could award it to the entire US Olympic hockey team. Here's a link to that issue in The SI archive, where you can read a fantastic article about the award (beginning on page 30). You'll not only get an excellent look into the 1980 team and the Olympic tournament, but also what was going on in the world at the time.

(4) The actual game. Search YouTube and you'll find highlights from the ABC television broadcast with Al Michaels and Ken Dryden. And here's the call from ABC radio, synced with the video footage. I like that one the most, because the commentator was right there in the crowd, and his commentary is just so raw and jubilant. You can also find highlights from games the US played against other teams throughout the tournament. (For example, the final game against Finland that clinched the Gold Medal was just as good.)


Whether you're a hockey fan or not, I hope you'll do at least some of that reading and watching as a way of celebrating the incredible victory 40 years later.

Thanks for helping me pay tribute to the event for a little while here on the blog.