Scratch-off games were big in the 1980s. State lotteries had them. McDonald's had them. Publisher's Clearing House had them. And as many of you readers may know, trading card companies had them.
The most popular example would likely be the 1981 Topps baseball scratch-off game. (Honorable mention to 1980 Donruss Pac-Man.) 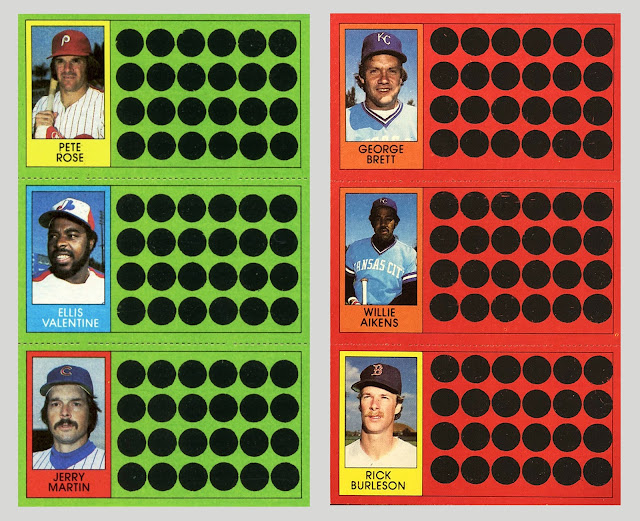 These three-card panels were separate from the flagship set, and were issued in their own wax packs—six panels per pack, plus one stick of bubble gum. The cards came in two color varieties: green for National League players and red for American League players.
Kids would use these cards to play an actual "game". The rules were the same as real baseball: Choose your team of nine players, create your lineup, and scratch off one of those little black circles on the player's card when he comes to bat. Each circle reveals a hit or an out of some kind. Score as many runs as you can before revealing three outs. Once your side is retired, the other player starts scratching off his circles for the inning. Fun!

Now here's the interesting thing: Topps decided to do something similar during the concurrent hockey season (1980-81). But they went scratch-off mad.
Instead of creating a separate hockey game similar to the baseball version, Topps added the special scratch-off coating directly to the front of all the cards in the flagship set.
Specifically, the coating appeared over the player's name. And to add to the challenge, the names were deliberately left off the back of the cards too. So, if you didn't have good knowledge of an NHL player by his image or jersey number, you'd have to find out by scratching off the puck to reveal the name underneath.

Personally, I don't really mind the idea. Well, at least the little-kid version of me wouldn't have minded, because collecting cards back then was for fun, not dollars. And besides, Canadian counterpart O-Pee-Chee decided against the scratch-off pucks for their 1980-81 set, so examples of how cards look when they are undamaged and free from scratch-off residue do exist out there.
However, to many collectors the scratch-off puck idea was a poor one, and I understand that. After all, if you're trying to put a complete set together, do you go scratched? Unscratched? A combination of the two?
I was thinking about all this a couple of months ago, and came to the conclusion that it may have been a better move for Topps to keep the flagship cards uncoated, and if they really wanted to cash in on the popularity of the scratch-off craze, issue a separate game like they did for baseball.
And that's exactly when I said, "Hey, let's create one!"
Here's what the hockey version of the scratch-off game could have looked like.
First, the panels. 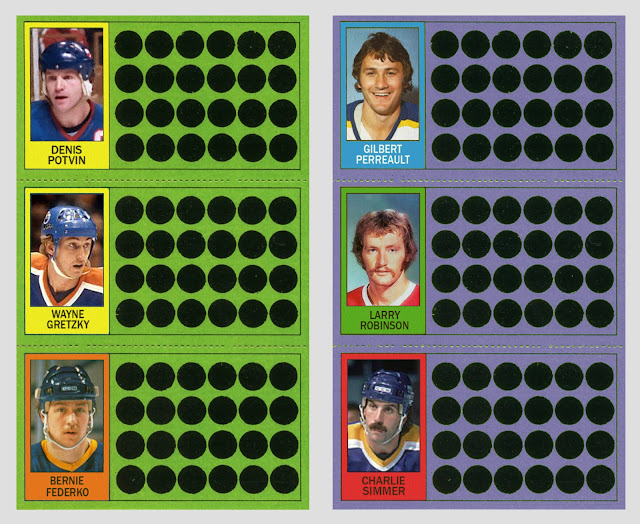 I like the green color of the baseball panels, but decided to ditch the red. After trying various colors, I chose purple. The cool-ish color seems to work with hockey, a cool-weather sport. And Topps did use a similar purple color for some of the card borders in the 1980-81 set. (See the John Garrett card above.)
Next, the panel backs, featuring the rules, scoreboard, and a merchandise offer. Original baseball panel on the left, newly created hockey panel on the right. 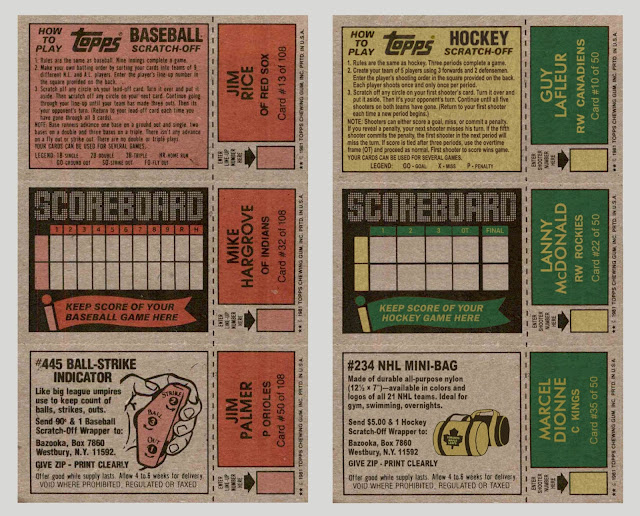 For the baseball version, Topps used the same red and pink colors that they did for the backs on their flagship 1981 set. I tried the same thing for the hockey version, using the green and yellow colors that Topps used for their 1980-81 flagship hockey set.
Here's an enlarged shot of each panel. 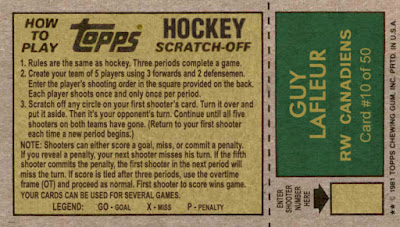 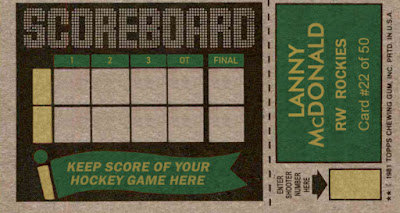 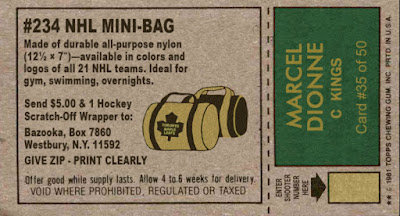 Don't send $5.00 to that P.O. Box. You won't receive your NHL mini-bag.
However, there is a prize of sorts. We're actually going to play a game, right here, virtually! (I didn't do so much design work on these panels for nothing.)
First, let's go over the rules. If you don't want to zoom in on the image above, here's the summary:
(1) You and your competitor each select a team of five skaters: Three forwards and two defensemen. Each skater will "shoot" once per period. You choose the order in which they'll shoot and write that number in the box at the bottom right.
(2) You and your competitor take turns shooting by scratching off a circle on your next shooter's card. Revealing a "GO" means that player has scored a goal. Revealing an "X" means that player has missed, and revealing a "P" means that player has committed a penalty. When a penalty is revealed, the next player in your shooting lineup will miss his turn.
(3) At the end of the period, you and your competitor tally up the number of goals scored and write the totals in the corresponding box on the scorecard. Repeat for periods 2 and 3. If the game is tied after regulation, an overtime period is played. First player to score a goal wins.
(Note that better players will have more "GO" circles, and therefore fewer "X" and/or "P" circles. This means that the shooting order you choose for your five players does have some importance.)
Now let's imagine we're right in the middle of the 1980-81 season and two hockey-loving kids are setting up a game. We'll call one kid Tim (a.k.a. Timmy), and the other kid Steve (a.k.a. Stevie). Picture them sitting on the floor facing each other, shoe boxes filled with hockey cards and scratch-offs at the ready.
After downing some Hi-C juice boxes, they're ready to get down to business:
Timmy was recently rewarded with a few packs of 1980-81 Topps Hockey Scratch-Offs for a good report card, and with those packs he's put together his starting five as follows: 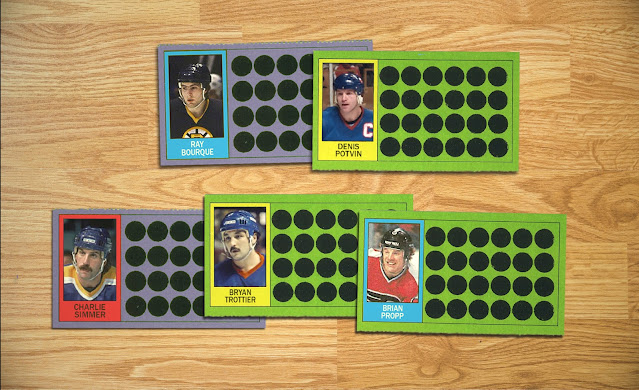 His shooting order will be: Simmer, Potvin, Propp, Bourque, Trottier
Sitting across the floor we have Stevie, who's been shoveling snow for his neighbors this winter, and has used a good portion of that shoveling money on trading cards and scratch-offs. One look at Timmy's lineup, and Stevie felt he needed to bring out a couple of big guns of his own. Here's his group of five: 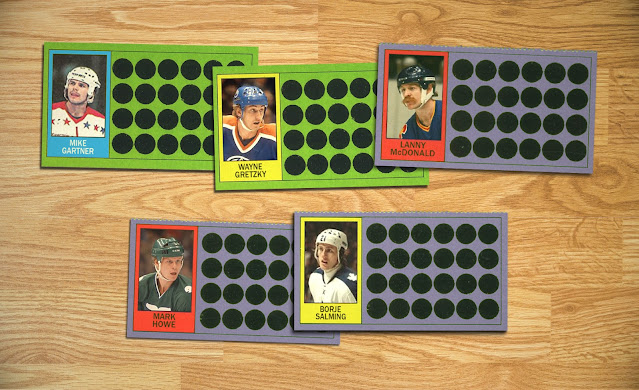 And his shooting order: McDonald, Salming, Howe, Gretzky, Gartner
With the teams ready, both kids grab their quarters for scratching. Can you feel the tension?!?
Let's start the game.
(Note: I simulated the "scratching off" by putting a player's 24 outcomes in a randomizer, randomizing them five times, and then choosing the outcome that landed in the first spot. Then I removed that selected outcome before the player's next turn, so it couldn't be repeated.)

What a chippy start—three penalties in the period, including the very first attempt of the game! Bryan Trottier finally got Timmy’s team on the board with their last shot of the period, but Stevie has the early lead, 2­–1.

Things settled down in the second period, with a couple of goals right from the start. Timmy’s team got back in it with Simmer, Propp, and Bourque all lighting the lamp. Surprisingly, clutch players Gretzky and Trottier both missed their attempts. And so the score is now tied, 4–4!

Remember, Mike Gartner’s penalty with the last attempt means that the first shooter on his team will miss his turn in the third period. Will it come back to bite Stevie?

What a finish! Timmy’s first three players scored on their shots, and although Gretzky and Gartner both scored to finish for Stevie’s team, it just wasn’t enough. Team Timmy wins, 7–6!

Mike Gartner might be in the doghouse for a day or two. And just for fun, here's the Gretzky panel after the game, showing the scratched-off circles. (Stevie is definitely keeping this card for another game.) 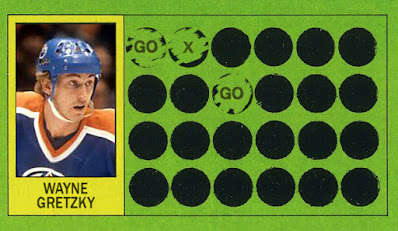 Well, that was even a little more fun than I thought it would be. Hope you all enjoyed the post.
Now who wants next game?
at February 28, 2021 18 comments: 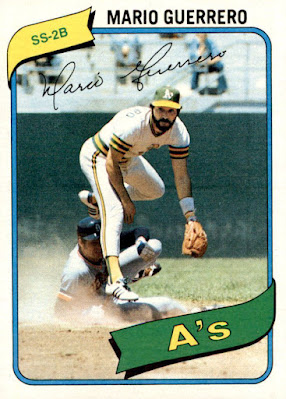 I miss the days when base runners would try real hard to break up a double play, and the infielder manning second base had to somehow catch the ball, transition it from glove hand to free hand, throw it to first base, and leap over the sliding (or barrel rolling) miscreant all in one quick, fluid motion. Granted, base runners still carry out the "hard slide" in today's game, but not with anything near the frequency and ferocity that once existed.
Enter Mario Guerrero's 1980 Topps card. It's certainly not the earliest to show the action of a double play being turned (for some stunning examples you can go all the way back to 1956 Topps), but it captures the moment in battle perfectly.
Have a look at the Detroit Tiger on the ground. His slide may have been so forceful that it took him completely through the bag. As for Mario Guerrero, the concentration and body control on display is terrific. You can be sure he's going to land on that right foot with the nimbleness of a cat.
And at 5' 10", 155 pounds, why wouldn't Mr. Guerrero be nimble? And agile? And quick? All the qualities you'd want in a middle infielder.
Over the course of an eight-year MLB career, Guerrero played shortstop and second base for Boston, St. Louis, California, and Oakland.
His best numbers came in 1978, when he played close to a full season's worth of games for Oakland (143). He put up 139 hits, 18 doubles, 38 RBI, and a .275 average.
He had pretty good numbers in the field that year as well, racking up 258 putouts, 330 assists, and helping to turn 67 double plays—all career highs, all at shortstop. Those 258 putouts put him in 3rd place in the American League and 5th in the Majors. Not too shabby for a guy who'd never played more than 93 games in a season up to that point.
Thankfully, a couple of years later Topps gave him a great-looking card to back it up.
For that special defensive ability only a middle infielder can display—and for the rugged nature of old-school baseball—1980 Topps #49 has a spot in my box of favorite cards.
at February 21, 2021 10 comments: