Slight conundrum: At the moment I've got more than 5,000 cards on my trade list at Trading Card Database, but less than 1,000 on my want list.

As you can imagine, this can throw a kink into trade making. Sometimes I do find a great match where both parties can exchange cards on their trade list for cards on their want list. But just as often I'll have a stack of cards that a fellow collector needs, while that collector will have nothing on my scant want list to send in return.

When this kink does appear, I can sometimes straighten it out by searching that collector's trade lists, just to see if any available cards catch my eye.

The following cards are perfect examples from a recent trade. They weren't on my want list (I didn't even know the set existed), but after spotting them on the fellow collector's trade list I had to grab them.

Here's one to start:


Just look at that masterpiece. The color scheme, fonts, and artwork could almost be straight from the sales catalog you'd have seen at a dealership in 1953. Don't you want to flip to the next page so you can start looking at the various options for paint color, tires, engine, and interior? I know I do.

I mean, come on. If you had a family in 1953 and needed a four-door sedan, why wouldn't you have given that thing a test drive?

Here are a couple of oldies that came with the trade:


Just like the baseball cards of the time, these World on Wheels cards are slightly oversized (2-5/8" x 3-3/4") and they're printed on thicker card stock.

I also received a couple of racers:


I'd imagine driving at even 60 miles per hour in either of these vehicles would have been a thrill. (Also, I wonder if that's a Mobil Pegasus on the front-left panel of the Cummins Diesel. Anyone know?)

Here are two examples of the card backs. I like the tire illustration behind the card numbers, and the informational cartoons on the right. 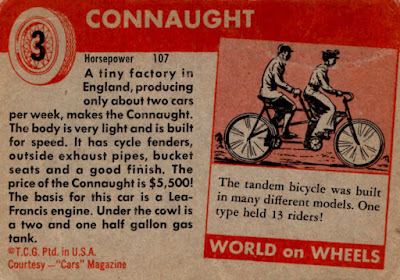 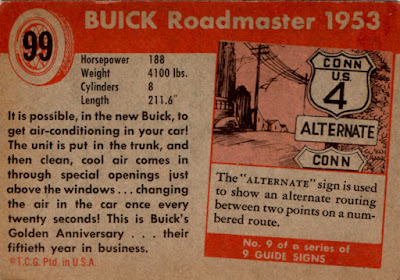 Getting back to the factory-standard vehicles of the time, here's a swanky Buick Roadmaster (hardtop!) and a stylish, two-toned Volkswagen Beetle convertible.

And finally, this thing:

Count Alexis de Sakhnoffsky was quite the brilliant illustrator and designer, and worked with Bentley, Buick, Cadillac, Mercedes-Benz, Packard, and more. This particular dream car reminds me a little bit of the original George Barris Batmobile, only in olive green instead of black.

In any case, overall I'd say these nine cards were an excellent addition to the trade.

Did I need them? No. In fact, they're the first cards featuring vehicles that I've ever owned. But if I hadn't taken a look through that particular member's cards in order to help create a balanced trade, I still wouldn't know anything about them. It's just an added benefit to making trades with fellow collectors.

Anyone else have similar experiences? Share in the comment section, and thank you for reading!
at August 25, 2019 8 comments:

Today's custom card features an actor who could sling bullets with the best of them, and was inspired by a baseball player who could catch bullets (the baseball kind) just as proficiently.


When you look at that glare on the face of Mr. Nettles, does a particular actor come to mind? If not, here are some clues:

One of his well-known characters rode into a dusty town looking for a fistful of dollars.

And then after that, for a few dollars more.

You might call one of the other characters he portrayed a little . . . dirty. 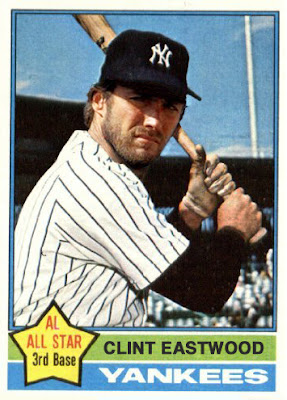 It didn't take long to find a comparable image of Clint Eastwood. As for the text, I decided to leave the "3rd Base" and "Yankees" designations alone, because who doesn't grin when they think of Clint Eastwood actually playing third base?

I mean, would you hit a line drive at him? Not sure I would. Because that might upset him. And you know the next time he's up at bat the pitcher is going to be too scared to pitch, and will gladly issue an intentional walk.

Once Clint reaches first base he'll call over to you (you're a middle infielder) and ask if you're feeling lucky. Then he'll immediately steal second, but instead of sliding into the bag he'll just plow right into you and knock you over. And then, perched on second base, he'll look down at you disdainfully with those steely eyes, just like Graig Nettles is staring down a fictitious pitcher on his card. Look at both of them again. Either man could be thinking, Go ahead, make my day.

As it's become the norm here with custom cards of actor-dopplegangers, I've made a second version using a different picture and revised text. 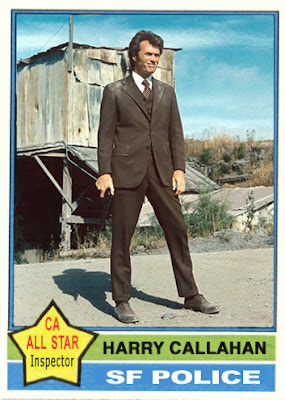 I thought the all-star badge doubled seamlessly as a police badge, so an image of Inspector Harry Callahan was the natural choice.

For the text, I switched the AL abbreviation to CA for California (because I figure if Harry Callahan "played" for the San Francisco Police Department, the team would be part of the California League).

The first image of Mr. Eastwood is from A Fistful of Dollars. (Cowboy hat replaced with a baseball cap.) The second image is of course from the Dirty Harry film.

These customs are a lot of fun. I've created enough now to catalog them on a separate page here at Nine Pockets. You can see them all here.

Hope you're enjoying the series. Thanks as always for reading.
at August 18, 2019 12 comments:

Today you won't be reading a long, nostalgic, thought-provoking description of why this card is in my box of favorites.

You don't need one.

I mean, just look at it: 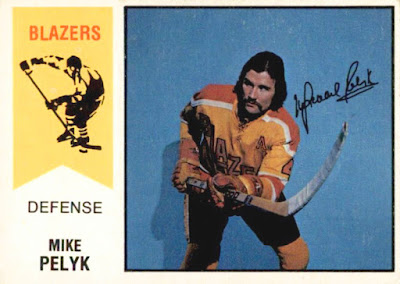 You can practically hear Led Zeppelin blasting from the radio in his Chevelle SS.

Aside from the look, Mike Pelyk also nailed down a pretty serviceable professional hockey career. From 1967-68 to 1972-73, the Toronto native played for his very own Maple Leafs (a success right there, full stop!), and put up a total of 13 goals and 40 assists. He really broke out offensively in the 1973-74 season, though, nearly matching his career goal output (12) and adding 19 more assists in that one season alone.

Surely it was good for his confidence—and with his contract expiring, you'd think it would be just as beneficial for his wallet.

However, an offer from the Cincinnati Stingers of the WHA sure was (one million dollars for seven years, which at the time for a rugged defenseman like Pelyk was quite a large amount). And as much as Mr. Pelyk would have liked to stay with his hometown team, the WHA's offer was just too good. He took it, and would end up being loaned to the Vancouver Blazers for a season, which gave us this gem of a card. After that, he did join the Stingers for a season before returning to the NHL and the Leafs to wrap up his playing career.

All in all, a successful decade of pro hockey and a fantastic trading card.

The Feats of Youngblood

Something rather remarkable happened 37 years ago today:

If you're a baseball card collector, you might even have a card that documented the feat.

To briefly recount the story:

That afternoon, Youngblood and his New York Mets were busy competing against the Chicago Cubs at Wrigley Field. In the top of the 3rd inning he drove in a couple of runs on a single, and shortly thereafter—before the game was even over—he was brought into the locker room where he was told he'd been traded to the Montreal Expos.

Well, Mr. Youngblood decided to grab a couple of bats and his mitt and head straight to the airport, where he'd catch a flight and meet up with the Expos in Philadelphia. His new team was preparing to face off against the Phillies that evening.

He arrived in time to suit up, and was put into right field in the bottom of the 6th inning. In the top of the very next inning, he stepped into the batter's box with two outs and delivered a single. Quite the feat, and quite the introduction to his new teammates, to be sure.

As for the cardboard connection, I think the design of that 1983 Fleer Superstar Special card could have been a little bit better in a couple of ways. First of all, Fleer could have certainly picked a better image of Youngblood in a Mets uniform. Not sure what's up with the face he's making there. Secondly, I think the caption would have been better if it mentioned two hits for two teams in one day instead of just two teams in one day. So, I decided to make a custom card using a modified 1984 Topps Highlight template. (A 1983 Topps template would have been more accurate, but that year's set only had a Record Breaker design, and it was kind of plain. Besides, Youngblood's feat was more of a highlight than a record breaker.) 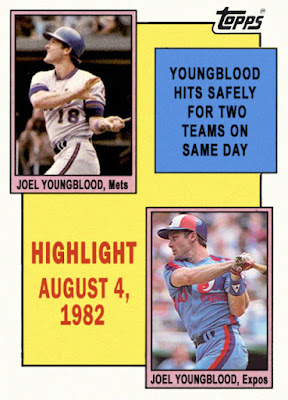 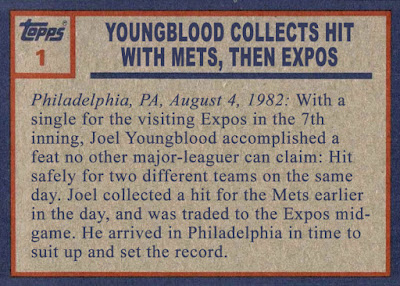 One additional piece of information that makes the feat even more special? Both of those hits came against future Hall-of-Fame pitchers. Youngblood singled against Fergie Jenkins in the afternoon, and against Steve Carlton in the evening.