A few months ago I posted the following custom card featuring a character named "Ed" from Nickelodeon's All That (and later, the Good Burger film). Next to it is the original card that inspired the custom. 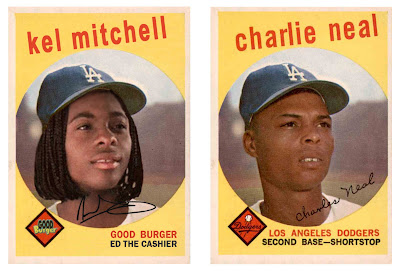 You can see that Ed (played by actor Kel Mitchell) bears a strong resemblance to Charley Neal on that original 1959 Topps card.

Well, at the bottom of that post, Matt from Sport Card Collectors (and the newer Cards Over Coffee blog) left a comment in which he stated how much he enjoyed the Good Burger skits and the custom card. He also made a suggestion: If the card featured an image of Ed, why not also use his name on the top of the card instead of Kel Mitchell's?

My original logic was that because the character doesn't have a last name, listing the first name "Ed" at the top of the card would look a bit strange by itself, especially as both letters would be lowercase. However, I gave it some more thought, and figured it'd be fun to whip up another custom card. 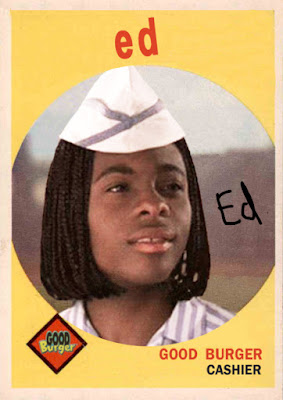 There's Ed, happy to be representing Good Burger in his official uniform and playing the position of cashier.
Notice that I had to remove Kel Mitchell's signature and replace it with Ed's. This gave me some artistic license, as Ed is a fictional character and I don't think his signature is ever shown in the skits or the film. But if you're familiar with Ed's eccentricities, I hope you'll agree that his signature might very well look like the one you see on the card.
And there you have it. My first custom card "variation".

To this point I haven't printed out/mailed out any of my custom cards to anyone. However, lately I've been looking into various printing techniques and services, and I'm going to finally try something with this card.
For now, it'll probably just involve some thick cardstock that will fit in my inkjet printer, followed by a pair of scissors. I'm only going to send one copy into the wild, and it'll go to Matt. (I think he deserves a copy for providing the inspiration with his comment). I'll label it as a promo on the back.
If I do print out more of these one day, maybe I'll make it a short print. That would be properly annoying for a variation, right?
Jokes aside, thanks for reading, everyone. And stay tuned for updates on custom card printing.
at October 25, 2020 6 comments:

This Perma-Graphic credit card arrived in the mail recently (front and back shown). It was originally issued by Topps in 1981, but it's still good today. 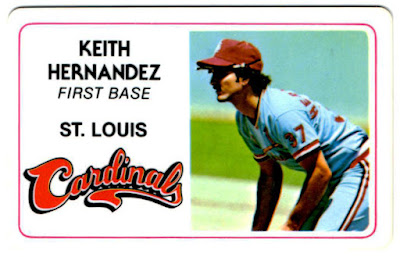 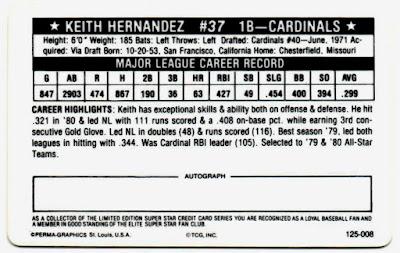 The cards are printed on plastic of a similar thickness to any other valid credit card. Similar length and width, too.

And just as with many other brands, they're available in a variety of designs. I went with Keith Hernandez here, who'd soon win the first of his two World Series Championships. By this point he'd already won three Gold Glove awards and taken home a share of the 1979 MVP award. Pretty good player to represent your credit rating, don't you think?

As for the full list of designs on offer, there are 32 in all, with many of the big names you'd expect. The first five cards will give you an idea: Bench, Schmidt, Brett, Yastrzemski, Rose.

And if that's not enough, there's this (in fine print at the bottom of the card):

AS A COLLECTOR OF THE LIMITED EDITION SUPER STAR CREDIT CARD SERIES YOU ARE RECOGNIZED AS A LOYAL BASEBALL FAN AND A MEMBER IN GOOD STANDING OF THE ELITE SUPER STAR FAN CLUB.

Surely your local department store manager will recognize that you—in good standing of the elite super star fan club—can charge items throughout the store with no limit.

Why not pick one up for yourself today?

(Note: I am an unpaid spokesperson)

More [Menko] than Meets the Eye

About a year ago I discovered the coolness of vintage Japanese baseball cards, also known as menko. Soon after, I added the first few to my collection. But since then I haven't added any more. In fact, I've hardly purchased trading cards of any kind.

Well, that changed recently when I had the opportunity to pick up a sizeable stack of menko. Not baseball menko, mind you, but something that'll be nostalgic for most 1980s kids like me:

There were 36 unique menko in the package: 16 Autobots, 2 combination cards, and 18 Decepticons. Quite a few duplicates as well.

I have to admit that for a little while I had buyer's remorse. Why did I need so many of them? I would have been more than happy with just a few, for a little nostalgia.

The other side of the coin, however, is that I don't think I've ever seen these menko come up on auction sites before. And I've already found one blogger who can use some of the duplicates (they're in the mail, SumoMenkoMan).

So enough with the rationalizing already. For many of you collectors out there, buying a few dozen cards is probably known as "a weekday". Let's get to the cards. 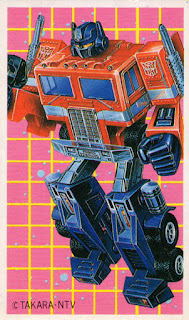 Couldn't start with anyone other than Optimus Prime, autobot leader (Semi Truck). The grid lines in the background alone indicate that this card is from the 1980s. (1985, to be exact.)

Next we've got Red Alert (Lamborghini), Trailbreaker (Camper Truck), Inferno (Fire Truck), and Sideswipe (Lamborghini). The colors on all of these menko are still impressively vibrant. 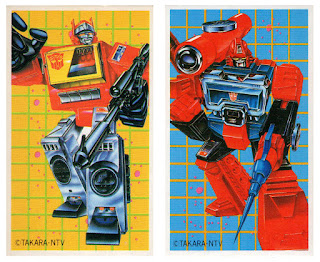 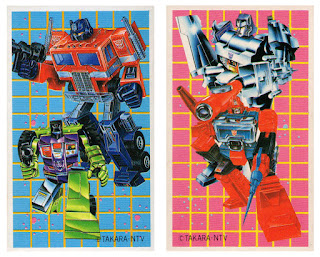 Here are a couple of card backs, one Autobot and one Decepticon. On the bottom you'll see that kids could have used these cards for a rock-paper-scissors game, as well as a game that simulated some sort of dice throw. 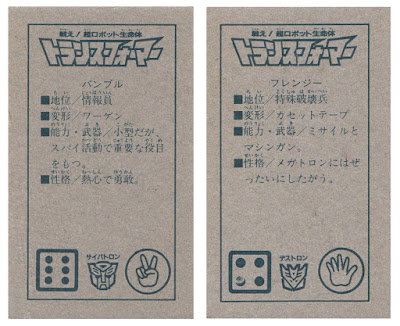 Now let's get to the Decepticons. 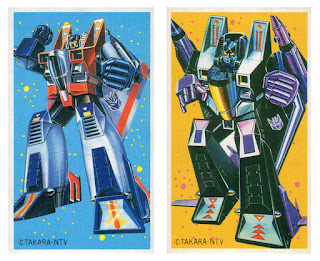 Two of the fighter jets were included (Starscream on the left, Skywarp on the right). As far as names of evil robot fighter jets are concerned, I don't think you can get much better than Starscream and Skywarp.

And when all six of those neon-green machines assembled together, they created this guy, named Devastator. Seems like it would be tricky for a robot to maneuver with a front-end loader as one foot and a cement mixer as the other, but by gosh Devastator did it. 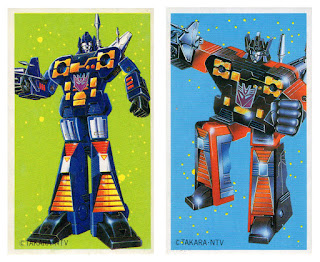 Next we've got Frenzy and Rumble (Audio Cassettes). I always liked these guys, because in the original cartoon they spoke with a slight "tough guy from Brooklyn" accent. Just watch and listen to this short clip, as Rumble gets fooled by some Autobots.


"I must have static in my rectifiers", he says. 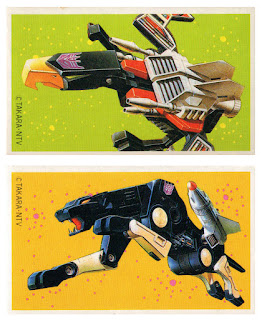 Here are another two audio cassettes, Laserbeak and Ravage. I think Ravage may have been the first Transformer I owned way back then. My dad bought it for me one night from a vendor on a Manhattan sidewalk as we were walking back to the apartment.

And why are there so many audio cassettes, you ask?

This guy! Soundwave, the cassette player and recorder. He'd send the cassettes out to gather intelligence. Then they'd return, transform into their cassette mode, and Soundwave would play back the information they gathered.

Finally, there's Reflector, with a cameo on the lower left by Shockwave. I didn't know much about Reflector, but in my research I discovered that three smaller Decepticons (Spectro, Spyglass, and Viewfinder) would join together to create him. He's a camera in his other form.


These menko will always provide a great little trip down memory lane for me, and I can imagine they've done the same for a few of you folks who grew up around the same time.

Did you have a favorite Transformer back then? Own any of the toys? Share in the comment section, and thanks for reading, as always.

Back in 1988, the grade school version of me was busy playing Little League baseball, collecting baseball cards, and loving it. However, I'd also made a new friend at school who played hockey. (As did all of his brothers. I think there were six of them.) Soon I'd start learning more about this new sport, playing it, and by association, opening packs of hockey cards for the first time.

Because of all this, the 1988-89 Topps hockey set brings back a lot of fun memories for me. I'd open those first packs and immediately get hit by the players, the uniforms and logos, and the kid-friendly design. 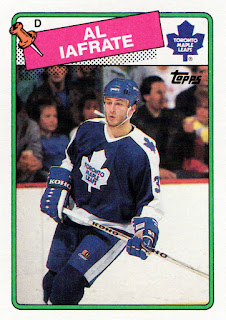 Just look at the cards. Everything is fun, colorful, and fitting for the decade. The slanted color bar with the pushpin holding it in place will remind any '80s kid of bulletin boards. The dotted pattern underneath is reminiscent of halftone comic book printing. Even the colors themselves are fun, with greens, magentas, yellows, and blues that I wouldn't hesitate to describe as neon. (Or is it Day-Glo?)

Beyond the design, though, this set of cards also helped teach me about the game. Here's how.

I'd already learned that playing hockey took a lot of physical effort. But the 1988-89 set showed me what to do if I got tired: Wait for the whistle to stop play, lean your stick across your shin pads, and catch your breath before the next face-off.

After a few seconds went by, the referee would skate into that face-off circle and prepare to drop the puck. Then I learned how important it was to get into your solid, stable, ready for action face-off stance.

Because once that puck dropped, you had to move like these next six guys.

Watch John MacLean hustle to avoid a hook from an Edmonton player. Dan Quinn is swooping in, looking for a potential rebound. And Dave Archibald might have just dished off a backhand pass while weaving through some Boston defenders. (Good job keeping your head up, Dave!)

Ron Sutter carries the puck across the red line with speed, alert and looking to make a play. Mats Naslund scoots down the wing, ready to receive a pass. And Wayne Presley sets up at the side of the net, preparing to deflect a shot or jam home a rebound.

Truth be told, though, this set of cards contains too many images of players leaning their sticks across their shin pads or lining up for a face-off. The six action cards you've just seen are few and far between.

Even the goalies did their share of standing around, look.

Regardless, it was all good information for a kid who'd just become enamored with the sport. And besides, along with giving me those hockey tips, the set also introduced me to some talented rookies like the three guys above (and the first guy below).

It also showed me just how momentous of an occasion it was when Wayne Gretzky was traded to Los Angeles. (And just how pink a checklist card could be.)

Here's an example of a card back. 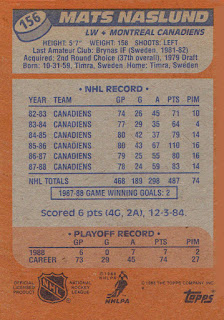 And finally, just as exciting as the cards were the stickers. They came one per pack, and featured a player who was named to either the first or second all-star team or, even more awesome, a team sticker that included block numbers and sometimes three little hockey puck decals.

Back then, if you actually followed the instructions on the card and put one of those hockey puck stickers on your helmet each time you scored a goal or an assist, you'd probably get beat up and have your helmet thrown over the fence.

Thanks for flipping through some 1988-89 Topps hockey cards with me. The set really is a fun one, and despite the shortage of action shots you'll still find some nice-looking cards and a huge number of Hall of Famers. At a manageable 198 total cards, it's not a daunting task to complete it—even less daunting if you've already got some of the key players like Gretzky, Hull, Shanahan, and Turgeon.

Now who wants to play Blades of Steel on the NES?