Look through any stack of baseball cards from the '50s, '60s, or '70s and you'll find scores of classic baseball poses. For position players you have the batting stance, the fielding stance, the bunting pose, and the bat on shoulder, to name a few. And for pitchers, there's the "hands over head" wind-up pose.


So classic and time-honored is this pose that throughout the decades you'll find cup-of-coffee pitchers, journeyman pitchers, all-stars, and even Hall-of-Famers putting their stamp on it.

But something is a little fishy in Pitcherville. And if you look closely at some of the images, you're bound to notice it:


The absence of a baseball in that pitching hand.

At first you might think, Okay, they're just posing for a baseball card, so it's fine.

But then you think about it some more:

They're on a baseball field, for crying out loud! Surely there's a baseball nearby.

Well, first let's note that there were pitchers who at least put forth the effort to hide their pitching hand and make things look authentic.

Sometimes they'd do it by turning the back of their glove to you.

If they really wanted to be careful, they'd pull that glove wayyy behind their head and look innocently away from the camera, like Mike Paul here.


And Doyle Alexander was so smart that he simply made sure his wind-up finished out of camera range.


But it's important now to provide a sampling of the miscreants—the brash guys who simply didn't care about committing pitching pose fraud. This activity was so prevalent that I had no problem finding a representative example from 15 straight years of Topps cards. You can find even more examples on your own.


John Tsitouris almost hid it well enough. But no.


An All-Star Rookie should do better than that, Mr. Fryman.


Jim Nash, that airbrushed baseball cap isn't distracting us from the truth.


Woodie Fryman, this is your second offense (see 1967 card above).
Changing your name from "Woody" to "Woodie" didn't fool anyone.
And this time you have disgraced Les Expos and all of Canada.


On your rookie card, Rick? For shame.


But don't despair. Not all pitchers are such scofflaws. There were a few good eggs out there who, before taking their pose, thought about the impressionable, bubble gum-chewing, card-collecting kids out there, looked around for a teammate, and said, "Hey, toss me a ball, will ya?"


Jim went with a used baseball for extra realism.


Jerry Augustine, leading the way into the 1980s.

Fernando's got a baseball in that left hand. And he's smiling because it feels good to do the right thing.

For all you young pitchers out there who aspire to have your image captured on cardboard one day, do the right thing, too.

Guardian Angel of the Long Ball

Our blogger friend Sean, who's getting back into baseball cards in Japan, showed us a few cards from the 1975 "Rocket Robots" menko set last month. If you happened to read that post, I'm wondering what sort of reaction you had when you saw this card of Sadaharu Oh.

Sean referred to it as "striking", which fits the bill perfectly.

It's the background that really does it for me. Those energetic white dots and streaks seem to be an abstract, artistic way of representing rays of the yellow sun behind him. Or maybe that sun is meant to symbolize something else, as Sean suggested:

The background artwork makes it look like he has a halo. Saint Oh, guardian angel of the long ball. . .

Well, after reading that line, inspiration struck, and it struck to the point that I put aside some of the other design projects I was working on and set right out to create a more saintly, stained glass version of the card. Here it is.

The idea for a stained glass baseball card isn't new. They've appeared in sets as far back as 1996, from what I can tell. But the notion is still excellent. After all, for some fans, baseball is a religion.

And if those folks were to enter their places of baseball worship, you can imagine they'd feel a sense of comfort and strength as they gazed up toward Sadaharu Oh, guardian angel of the long ball. Or perhaps they'd refer to him as the patron saint of the long ball.

Just look. There he is, with baseball's version of a sword held at the ready. His eyes describe a studious, wary focus—evidence that he understands the weightiness of his position. And who better to uphold that position than the career home run leader in Nippon Professional Baseball history? (He retired in 1980 with 868 home runs, and still holds the lead by more than 200.)


Thank you for providing some for me, Sean.

Episode 8 ended in a tie between Keith Brown and Brad Palmer. You can still go back and vote to help break the tie!

Now let's start the 9th round and introduce the bachelors chosen by the randomizer! [APPLAUSE]

And folks, we've got a pretty special episode tonight. There's electricity in the air, and young ladies have been swarming the studio since early this morning. Let's introduce the bachelors and find out why. 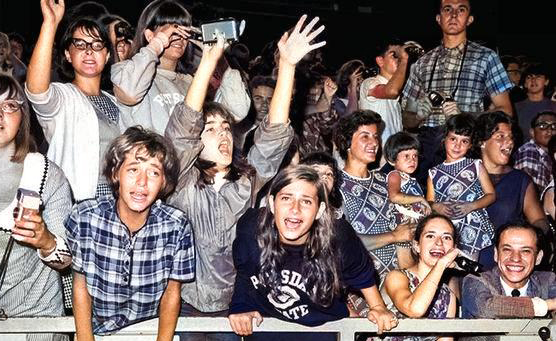 OWWWWW! WAYNE! OVER HERE! WOOOOOOO! WE LOVE YOU! YOWWWW!

Now let's find out more about these bachelors from the back of their cards. 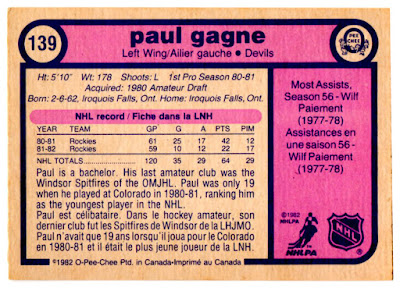 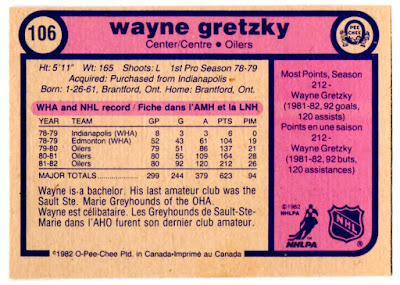 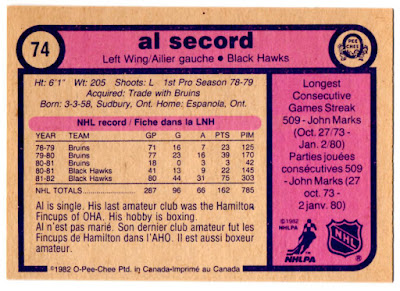 You see, ladies? You made such a scene that Wayne got a little bashful and just couldn't think of anything interesting to share with us. But we've got to start voting. Who will the winner be this week?

Bachelor number 1: Former Spitfire Paul Gagne, who set a record as the youngest player in the NHL just a couple of years ago. 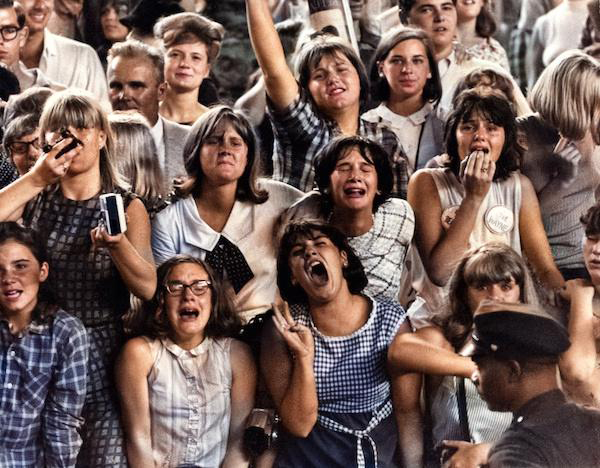 More than anything, it's those green borders. (Why green?) Folks will also point to the odd color gradient that runs from top to bottom. Then there's a small horizontal first name stacked on top of a big last name that's rotated 90 degrees. And that leads to a reduced amount of space for the player image.

What's interesting is that over the years it seems like many collectors have softened on the design—myself included. Back then I didn't like it at all. I was in my early adolescence and losing interest in collecting, so this set didn't exactly help rekindle anything. Fast-forward two or three decades, though, and I think '92 Fleer fits quite well in its time.

And to be fair, there are some attractive elements. I like how some of the players overlap the green border, producing a 3D effect. (See Mr. Hulett's left foot up there.) And some of the images are well done and show good baseball action.

However, I think it can be better. That's where this redesign post comes in.

It's the green color that I wanted to change most, so I tested out a bunch of different options and ended up with a few that were feasible. After a bit more pondering and narrowing down, I found two colors that I thought were real hits: A blue-gray (let's call it "slate"), and a more standard dark gray (let's call it "charcoal"). Then I applied those colors to some of my favorite cards in the set. I'll show those here.

Have a look at Bob Geren, Orel Hershiser, and Ryne Sandberg in their original greens:

They're really not terrible, right? In fact, seeing the cards side-by-side like this makes me appreciate the big letters for the last names a bit more. I like how they stand out.

But now have a look at the redesign:

Let's do the same with three more cards, this time showing how Fleer used different colors for the player names, depending on the team.

Again, not so bad. But the redesign:

The slate color seems a bit more sophisticated. Or maybe modern is the right word. I don't know.

Here are three more cards from the set that I like, shown with the original green borders:

One thing I notice is how the red text really stands out against the green background. (As do most colors. Maybe that contributed to Fleer's decision.)

Now here they are in charcoal:

The image on that Bill Sampen card really jumps out to me now.

And here's the redesign:

I find it interesting that on the redesign some colors are difficult to read at just the right spot of the gradient. For example, look at the second "E" in Henderson, or the "Y" in Griffey. They're just the right shade to blend into the background, or fool the eye. That sort of thing doesn't seem to happen as much on the original green borders, even with Rickey's green-on-green. Maybe that's another reason Fleer chose that color.

Overall, I really enjoyed this exercise. Along with re-tooling the original design, it was fun to simply go back and flip through the cards in this set. And after putting forth the redesign effort, it does seem like there was some method to Fleer's madness back then.

So what do you think? Original greens? Slate? Charcoal?

Last year I picked up the first wrestling card in my collection, and mentioned that I wasn't sure how much larger the collection would get.

Well, I just acquired wrestling card #2, so my collection has now doubled in size!


How do you even begin describing the '90s coolness factor with this one?

The first thing I notice is the shades. Wow. Then there's all the neon. And the hat. And the background that resembles the background from every single 1990s high school yearbook in existence.

Get past that, however, and you'll also see a classic menacing wrestler's pose. Just look. Those hands are ready to clamp down and grapple with you. Do you stand a chance? No. No you don't. (I wonder if Randy learned that pose from his father Angelo, who was a tremendous professional wrestler himself.)

In a funny way, the pose also reminds me of another wrestler. His name is The Crusher. 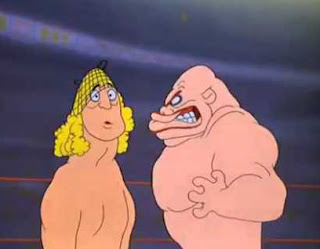 That's him on the right. (Don't worry. Bugs Bunny took care of him.)


Returning to the card, though, here's the back: 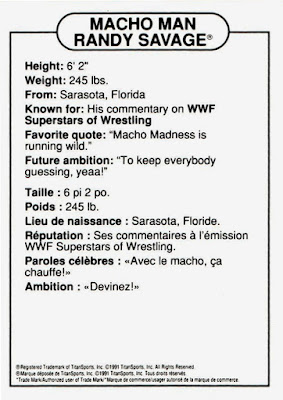 Notice how the information is printed in both English and French. That's because this card is from a set that was only available in Canada. And if the name Swanson sounds familiar, you're onto something. In 1991 you'd find two of these wrestling cards packed inside select Swanson TV dinners (available in your grocer's freezer).

So, if you grew up in Canada back then and really liked the WWF, you may have begged your mom or dad to buy Swanson TV dinners every week until you had the complete set. Or at least until you found your favorite wrestler.

I'm happy to have this card in my collection now, along with the Hulkster. Talk about two monuments of professional wrestling. To quote Randy Savage himself,