What's the most interesting addition I've made to my vintage card collection this year?

(Fronts and backs are pictured together throughout this post.) 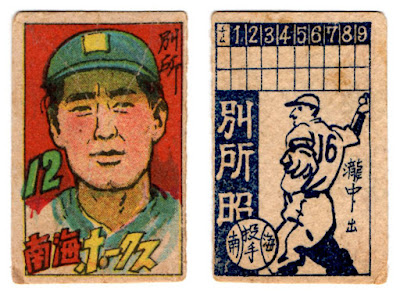 I still have a lot to learn about menko, which are often smaller than standard North American cards and thicker, too. But for me, one of the best parts of collecting anything is doing the research and learning about your collection, so I really look forward to digging deeper into the history of these Japanese beauties. 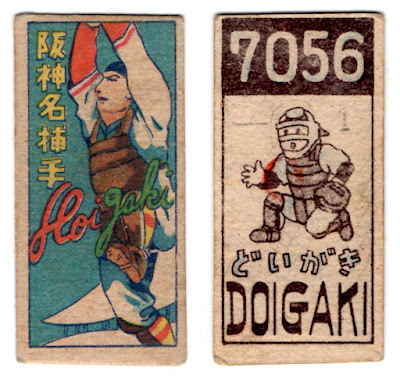 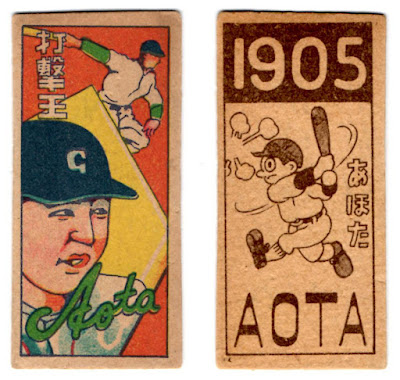 I've picked up eight menko over the past year or so, all baseball themed. As many of you collectors likely know, the subjects go well beyond baseball players. Images of automobiles, movie stars, robots, monsters, samurai, sumo, and more can be found. Most of the menko here date from the 1950s and 1960s, I think. 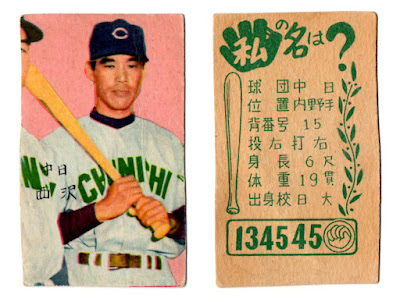 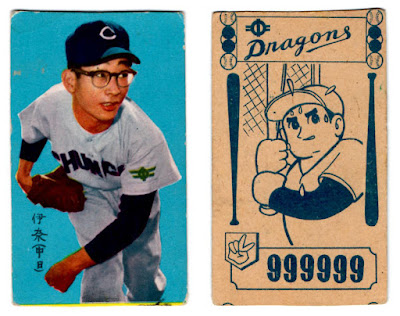 I'm enjoying the various images and illustrations. (Check out the classy spectacles and pose on that Chunichi Dragons pitcher above.) The designs on the back can vary greatly, but I do enjoy the cartoon-ish ones. 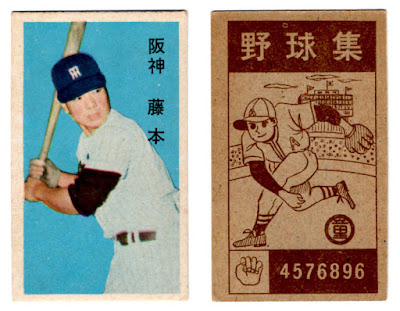 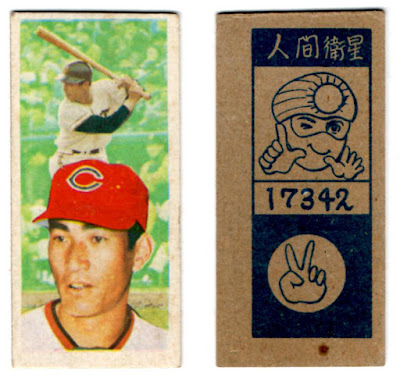 I also like the fact that menko were designed as a game for kids. From what I've gathered so far, a player puts one of their menko on the floor, face up, and the other player takes one of their menko and flings it down, trying to flip the first menko over on its back.

If that reminds you of the Pogs craze of the mid-1990s, you're not alone. If the idea of deliberately banging up your cards makes you cringe, you're also not alone. But menko were meant to be played with, and I think that's a good way to view them when it comes to condition.

For another interesting aspect of menko, look closely at some of the card backs. You'll see what appears to be a rock-paper-scissors type of game, with a small illustrated hand taking on the shape of a rock or a scissor (I don't have any examples of paper yet). I wonder if this was used for a trading game, where you'd each flip down a card, back side up, and see whose card had the winning object. Man, that'd be a tough way to lose a card. 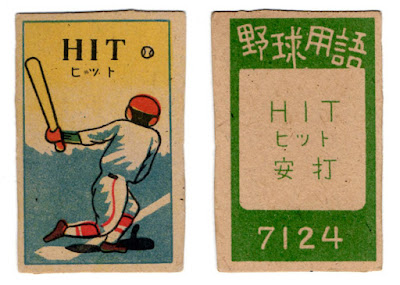 I also wonder how many kids back then tucked some of their menko away, not wanting to ding them up or lose them in a game. I'm sure a lot of kids had at least a couple of special ones.


Episode 4 ended in a tie between Ron Duguay and humble Aaron Broten. I wonder if the network will go with Duguay because his glamorous Studio 54 lifestyle is better for TV ratings.

In any case, let's start the 5th round and introduce the bachelors chosen by our randomizer! [APPLAUSE]

Let's find out more about them from the back of their cards. 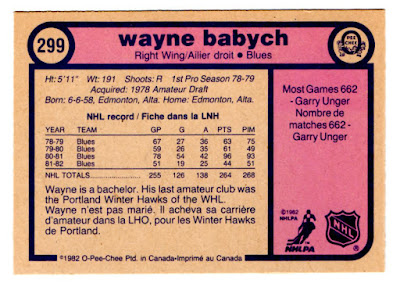 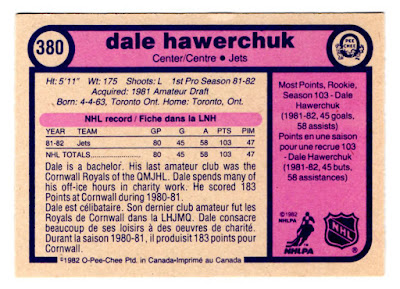 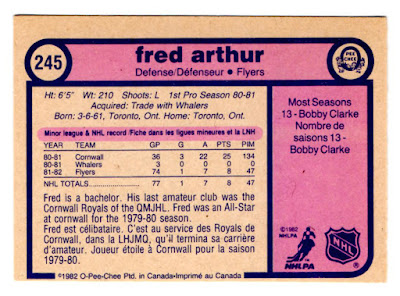 Once again, we have a couple of bachelors who became a little shy when the cameras were rolling. Will that affect the outcome, or did one of these bachelors have it in the bag from the start?

Bachelor number 1: Wayne Babych, whose unibrow is impressive. (Hey, some ladies like the unibrow.)

Bachelor number 2: Dale Hawerchuk, who's already known for his off-season charity work even though he's just a rookie. (Probably offering kisses to the ladies for $1.00 donations.)

For many collectors, this leaves poor Cecil Fielder pretty much all by himself as the rookie draw in the standard set. 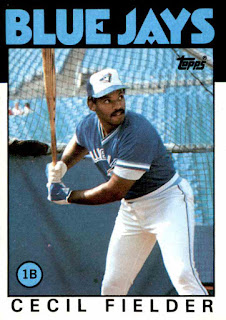 Regardless, it's really a shame that the set is overlooked, because the photography, although not spectacular, is a bit underrated.

Same goes for the design itself. Look at Cecil Fielder's card again.

The thick color-matched team name placed on top of the even thicker black color bar really does catch the eye. Combine that with the remaining white border and you get a card design that works very well for just about any team, as you'll see in many of the images here.

In addition, the first few cards in the set commemorate one of the all-time achievements in baseball history: Pete Rose's career hit record. 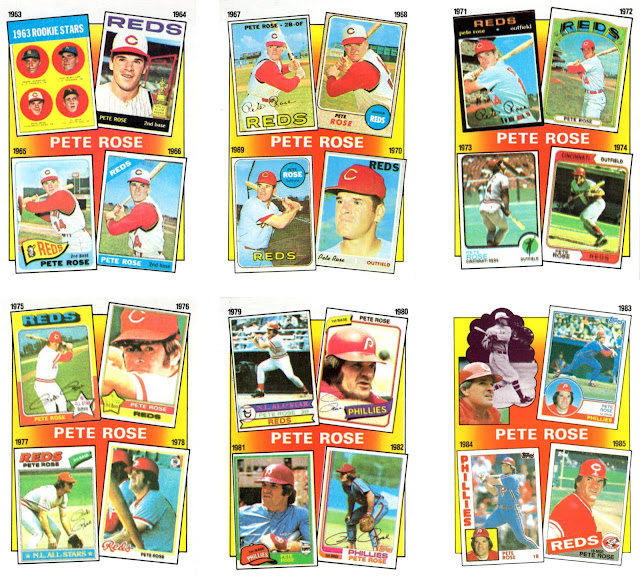 There's a nice little write-up on the back of each card, documenting some of Rose's highlights from each year featured on the front. 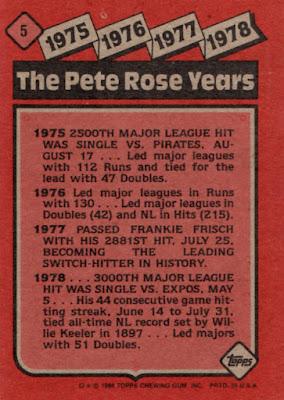 And there's even one more positive attribute of 1986 Topps:

Because it's often overlooked (and undervalued), it's quite easy to assemble the entire set of 792 cards. You can find numerous collectors who'd be happy to give you a tall stack of them. And if you want the "original experience", wax packs are still available and affordable. You can buy a few, open them, and add some cards to your set that way. 1986 fun at near-1986 prices!

Now that we've got some good energy going, let's flip through a bunch of the grade-A cards in the set:

You still have your share of classic posed shots, of course.

Some of the game-action shots are excellent.

As are some of the candid shots.

The Team Leader cards are quite attractive, too.

And the catchers? You'd be hard pressed to find six images like these in any other set of the era.

Here are some fun shots, because baseball is fun. 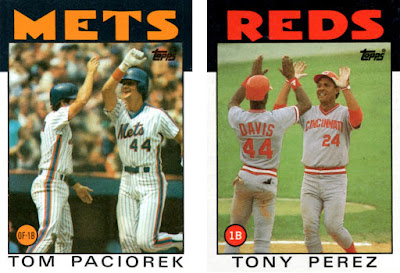 And finally, a peculiar shot that features John Wathan putting his morning bagel on a baseball bat for some reason. I think one day I might try eating a bagel this way. 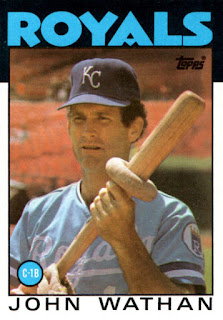 Here's an example of a card back. Note the Talkin' Baseball factoid that runs across the bottom (when space allows). 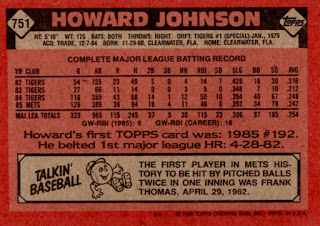 Want an example of a solid design effort? There are six different Talkin' Baseball cartoon guys. Along with the one above, here are the other five: 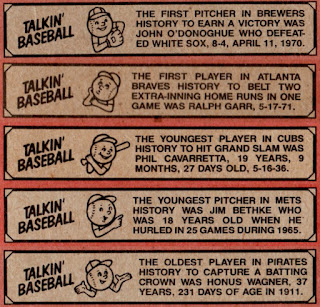 And here's the Spring Fever Baseball game piece that was inserted in each wax pack. 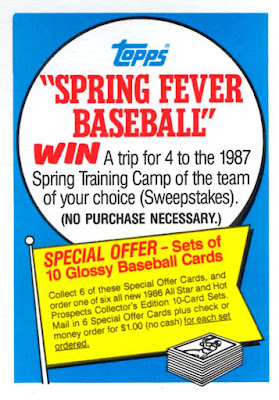 So you see? 1986 Topps Baseball isn't so bad. It has its detractors, and that's fine, especially when you consider what the set could have been if Topps had managed to squeeze in some of those star rookies. But it's still a good set, and I'm happy to have finally completed it.

Here's Rollie Fingers, frozen at a pivotal moment in his delivery: 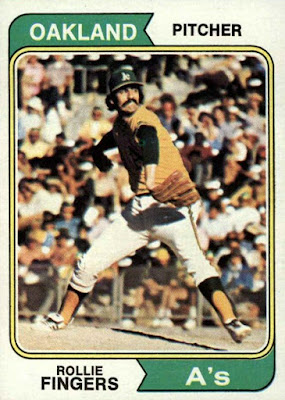 He's striding forward, stiff-lipped, eyes staring at the target, right wrist cocked and hiding behind him in the shadows. In just another fraction of a second that ball will be hurled toward the catcher's mitt at high speed.

But do you know what really gets me about this card?

It's just a wall of spectators, as far as the card borders allow you to see in every direction. If you look closely, you might see more than one of them shading their eyes with their hand on that bright, sunny afternoon. And the only thing separating all of them from the field?

Not even a solid fence. A chain-link fence.

There's no protective netting. No padded wall. No rolled-up tarp in front of them. Nothing. You can see everything. You can even see some of their feet peeking out from under the bottom railing. They may as well be on the field.

If you were the first baseman going over to field a foul pop-up, you'd probably be able to smell their suntan lotion and hear every word of every casual conversation. Every word of support. Every jeer. How visceral it all is.

So, if you were a kid opening packs of Topps baseball cards during the summer of '74 and you found Rollie Fingers about to fling one toward home plate, you'd probably be feeling pretty good—A's fan or not.

And for giving collectors an idea of what that feeling on the mound might have been like—a superstar surrounded by fans as far as the eye can see, anticipating your every pitch—1974 Topps #212 has a place in my box of favorite cards.
at September 08, 2019 10 comments:

I've been thinking about putting together a complete set of football cards from the 1980s. As a youngster back then I didn't collect football cards and wasn't really into the sport, but living in New York I do remember the Jets being cool, what with Ken O'Brien, Al Toon, Wesley Walker, and Mark Gastineau and the New York Sack Exchange. And of course the other New York team, the Giants, would be Super Bowl champions thanks to exciting characters like Lawrence Taylor, Phil Simms, Mark Bavaro, Joe Morris, and coach Bill Parcells. Even without all of that, there are simply some great football card designs from the decade.

While I was browsing through some online checklists a few weeks ago, thinking about which set I might go for, I came across an interesting surname:

I wasn't familiar with the name, but there are probably more names I'm unfamiliar with than names I'd recognize, so I didn't think much of it. Soon I was opening the next page of the checklist and scrolling down, looking for any names that did seem familiar. That's when I was caught a little bit by surprise.

I saw that Mike-Mayer surname again.

My first guess was that it might be a League Leader card, or a Highlight card, or an In Action card of the same Mike-Mayer guy.

It was just a standard base card. And this time the first name was Steve. I was pretty sure I saw a different first name for the Mike-Mayer card on the previous page, so I went back. Sure enough, on that previous page I found Nick Mike-Mayer.

And even still more fascinating?

They were both kickers! 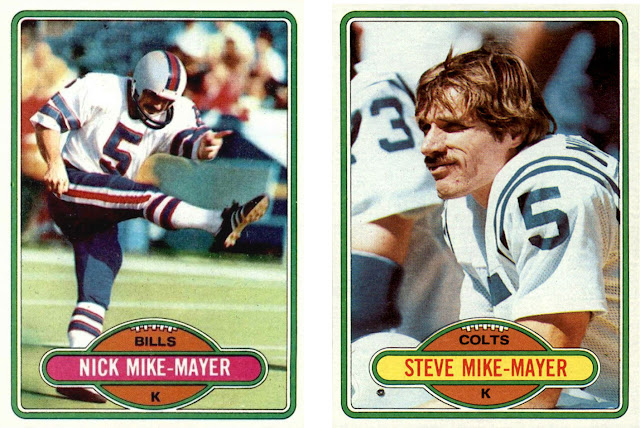 I always enjoy brother stories in professional sports, and featured a really good one here on the blog a few months ago that involved not two brothers, but three.

So, how do two brothers from Europe both become kickers in the NFL? Let's allow the cartoon on the back of Steve's 1978 card to give us a clue: 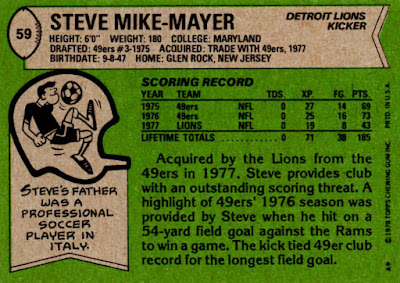 Their soccer-playing father first played in Hungary, where Steve was born. To escape communism, the family left the country for Italy, where Nick was born. Eventually they emigrated to the United States. New Jersey, to be precise.

From there, both brothers took the college football route to the NFL (Temple for Nick, Maryland for Steve). Nick was selected in the 10th round of the 1973 draft, and then Steve went in the 3rd round in 1975. Here's a quick summary:

Dad must have been proud!

I'd guess it's not too often that kickers get a storyline in the pregame show, but whenever these guys kicked against each other it must have been a feature.

All in all, a really cool story, and I'm sure I've only scratched the surface here. I'd love to see an interview with the two brothers just talking about their experiences—coming to the States, going to college, and playing in the NFL against each other.

Back to the original topic, though:

I'm still not sure what 1980s set to go for. The 1982 design is a classic and might be my favorite, but it's a whopping 528 cards and boasts the Lawrence Taylor, Ronnie Lott, and Anthony Munoz rookie cards, as well as a second-year Joe Montana.

The 1983 design is cool in a DeLorean kind of way, and is more manageable at 396 cards. The notable rookies (Jim McMahon, Mike Singletary, Marcus Allen) are a bit more affordable, too.

1987 and 1988 also seem to be affordable options, and the designs are still fun and very fitting for the decade.


*The Bahr brothers and the Gogolak brothers also kicked against each other in NFL games.
at September 01, 2019 10 comments: