The tough thing about hockey is that it's fast. Sometimes there's a giveaway at a bad time. Transition up the ice happens in an instant—and at a moment when you might be a bit flat-footed.

The great thing about hockey is that for just a moment, for a few hard strides, you do have the opportunity to catch up. And I think that's where Brian Propp might find himself here. 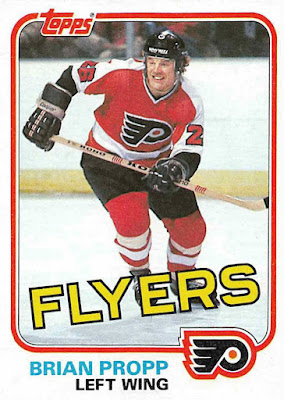 Look at the expression on his face. He's grinding. He's looking up the ice, either toward an opponent he needs to cover or toward his teammate who's rushing through the neutral zone with the puck. The card's design even lends itself to action, with that bright yellow team name flying across on the diagonal, and the thin, rounded orange border giving you a great little portal into the scene.

And speaking of action, Brian Propp was no stranger to the offensive side of it. Check out these stats from his 15-season career:

Even for a guy who played throughout the high-scoring 1980s, you can't shake a stick at those numbers. To back them up, here's more:

In a five-season stretch, Propp reached the 40-goal mark four times, and just missed hitting the mark in all five.

He had a couple of great playoff runs with Philadelphia, too, most impressively in 1986-87 when the Flyers made it to the Stanley Cup Finals, losing to Edmonton:

For certain we're looking at a great career, not to mention a great hockey jersey and a great hockey card design. But for reminding us of the grind and how great it is—that's why 1981-82 Topps #E110 has a spot in my box of favorite cards.
at June 28, 2020 10 comments:

Reading a blog is fun, isn't it?

The digital format is easy to navigate. You read, scroll down, view some images, scroll down some more, and leave a comment at the bottom if you'd like.

Fun. Easy. You can do it all from a digital device. Sitting in the park. Lying on the couch. Almost anywhere, anytime. And that's great.

But I hope some of you will agree with me when I say that there's nothing like holding an actual book in your hands and flipping through the pages.

And that affinity for printed material is why I decided to put some of the more personally meaningful posts from my first year of blogging into a print version using Mixbook, one of the many photo book services out there. (Other good photo book services include Snapfish, Apple, Flickr, and Shutterfly.)

It took some time to choose the posts I wanted to preserve most, and more time after that with layout, but it was well worth it. Here are some images of the finished product, as well as some tips if you think you might want to try a fun project like this yourself. I'm only familiar with the Mixbook interface, But I'd guess the other services are similar in the way you navigate around and create your book. 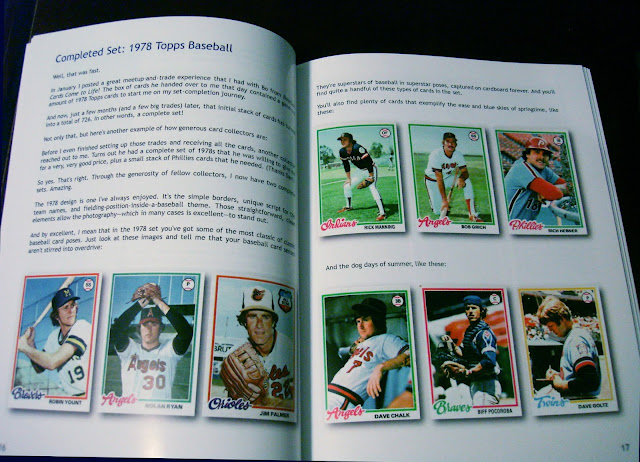 Overall, Mixbook's design tool was fairly easy to use. It's not professional publishing software, but it did get the job done without much fuss.

Text boxes can be inserted, dragged around, and resized on the page as much as you'd like, and you can change the font type, size, and color just as you would with any other publishing tool.

Same goes for your images. They can be moved around easily and resized right there on screen. If you do happen to enlarge one too much, a warning icon will appear to let you know that the image might not print at a high enough quality. You can also add features to your images such as borders and shadows. (The shadow feature works great for trading cards, as it gives them a little dimension on the page.) 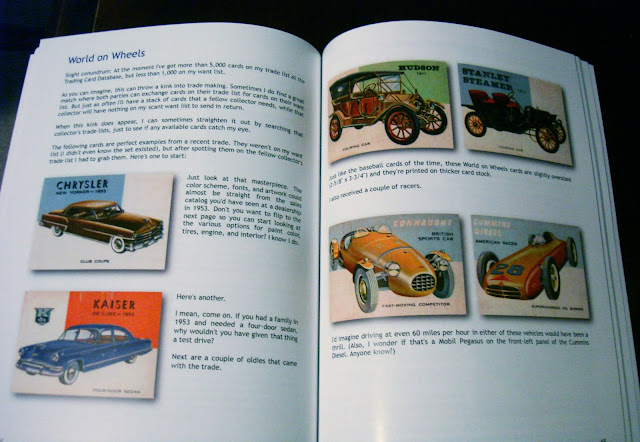 The trickiest part might be reworking the layout for print, because you've only got so much space per page. Very long blog posts that contain dozens and dozens of images won't work well, for example, just for the sheer number of pages they'd take up. (I whittled a couple of my entries down for the book.)

However, once you get the hang of adjusting column widths and figure alignments, the layout goes by more quickly. There's even a built-in feature that helps you align one image with another on the sides, top, or bottom. 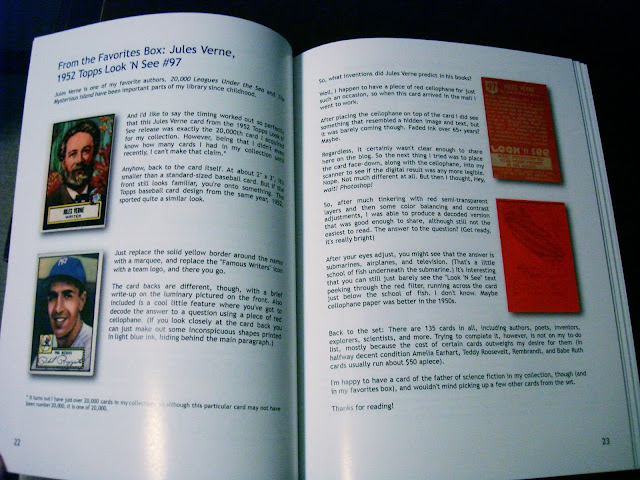 Mixbook also gives you numerous choices for book size and paper finish, which is a nice touch. Each book comes with 20 blank pages for you to fill, but take note that there's an extra charge for each page after that. (Currently it's anywhere from $0.69 to $2.39 per page, depending on how big and fancy of a book style you choose.) This really can add up if you're not paying attention. However, for the ability to hold a printed version of some memorable, meaningful blog posts in your hands, the extra page cost might really be worth it. 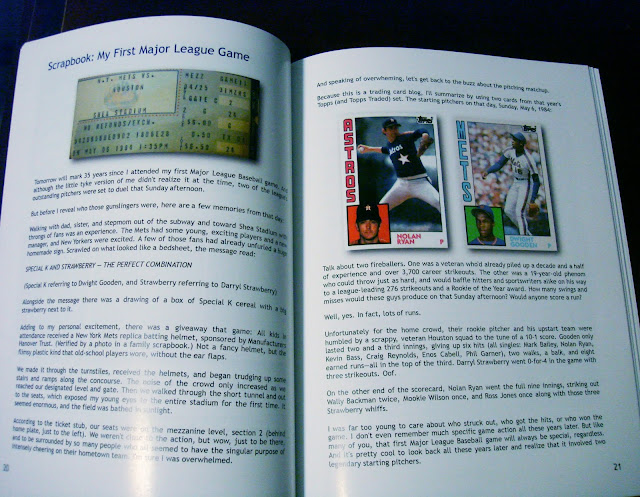 Why not go through your blog history, choose 5 or 10 entries (or more) that hold special meaning for you, and consider making a print version? It's a great way to look back on some of the work you've done, especially if you've been blogging for years. You'll be preserving some of that work in print form, and there's nothing like it.

Have a look at the pitching deliveries featured on these two cards, as Ramon Martinez almost seems to morph into his brother Pedro.

Two great careers, too, as foreshadowed by the opening sentence on the back of Pedro's 1991 Upper Deck Final Edition card #2F:

As if Ramon Martinez was not formidable enough for the Dodgers, Los Angeles also has his younger brother Pedro speeding through their farm system.

Most folks these days will know more about that younger brother Pedro, of course. He did speed through the Dodgers' farm system, so quickly in fact that he'd spend parts of the next two seasons up with the big club. But he started to show his stuff in earnest with the Montreal Expos in 1994. He built on strong numbers there until in 1997 he really let loose, going 17-8 with a major league–leading 1.90 ERA and 13 complete games. He also put up a whopping 305 strikeouts.

From there he went to the Red Sox, where remarkably he'd show even more of his stuff. In the five seasons from 1999 to 2003, he led the majors in ERA four times, and led the A.L. in strikeouts three times. In those same five years he went 82-21 and put up 1,205 strikeouts to only 181 walks. Those numbers could have been even more staggering had he not been injured for a good portion of the 2001 season.

But let's go back to that time when Pedro was still speeding through the Dodgers' farm system. Because in 1989 a whole lot of people were raving about older brother Ramon. If you were a baseball card collector back then, you'll remember Ramon's rookie cards being sought after. And he'd quickly prove there was good reason for that.

Rotator cuff surgery in 1998 shortened his career, but his totals across 14 seasons with the Dodgers, Red Sox, and Pirates are more than respectable.


Here are the career numbers for both brothers.
Pedro Martinez 
So here's to Ramon and Pedro, and to two careers worth celebrating here on the blog. I can only imagine how fun it must have been for them to pitch on the same team for those couple of early years.
at June 14, 2020 8 comments:

Back in March, I tried a redesign of the 1992 Fleer baseball set. It was mainly to see how the cards would look with a border color other than the green that Fleer went with.

I settled on two color options, navy blue and charcoal, and then selected a few cards to experiment with for each color. Well, I enjoyed the outcome (not to mention the reader response) so much that I wanted to experiment a little more. That's where this expanded redesign comes in.

With charcoal looking especially sharp—and probably being a better, more neutral fit across the board—I decided to try that color on one card from each baseball team. Results are below, running alphabetically by city.

For the sake of comparison, let's start by showing the original 1992 design. Here we have cards from the first three teams: Atlanta, Baltimore, and Boston.

Let's go through the rest of the teams.

With 26 teams total, I needed to fill that last slot. So I found one of the art cards that appear at the back of the set and gave it the charcoal treatment as well. It's rad enough that Ken Griffey Jr. is in outer space, deposited on an unknown planet by a diffraction of light through some sort of prism or interstellar travel device. But change the green border to a charcoal gray and it's even more rad. (Were kids still saying "rad" in 1992?)

Overall, I tried to match the color of the player names to the team colors a little more than Fleer did with the original design, while also making sure to keep the names bright against the dark gray.

As for the photography, I hope you'll agree that there are some excellent examples in this set. With the charcoal borders, I think the images really stand out more than they do against the original green, and I tried to choose a card from each team that exemplifies the point.

I have to admit something, though. After seeing each team laid out like this in the charcoal border, I started to think, Wait a minute. This looks like 1986 Topps, but using the player names instead of the team names and then rotating the text 90 degrees.

I wonder if the designers at Fleer considered using a similar color for the borders, but then thought the same thing. After all, 1986 was only a few years in the rear-view mirror at that point.

Regardless, I still really like the way these cards turned out. Hope you do, too.