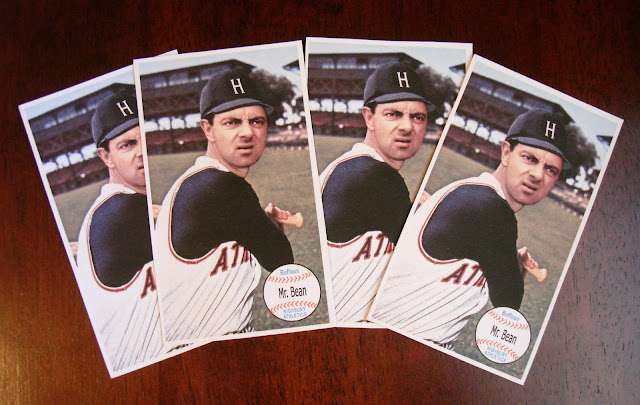 I've printed out the Mr. Bean Topps Giant design!
The original design I came up with only featured the front of the card, but I really wanted the print version to capture the full effect, so I added a custom card back. Here it is: 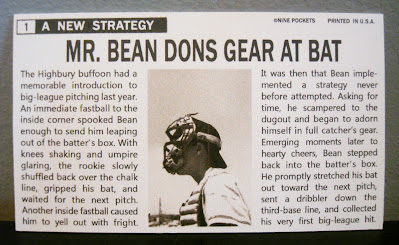 I figure that fictional account stays pretty true to Mr. Bean's mannerisms, and is something we might have seen in an episode of Mr. Bean back in the 1990s, had they done an episode on baseball.
These cards have the same dimensions as the original 1964 Topps Giants, 3 1/8" by 5 1/4". I tried to go with a background color that was a little off-white, and I also softened up some of the edges to make the cards seem a little more period correct.
Similar to the Samurai Jack menko that I printed out a while ago, we're going to do a little giveaway here. I'm going to send a copy of this Topps Giant card to the first two readers to leave a comment describing their favorite episode of Mr. Bean.
Also similar to the Samurai Jack menko, I've only printed out a small amount of Mr. Bean's card thus far, so the rest will be split between my bonanza store and eBay store. I plan to print out and assemble another batch soon.
If you're one of the claimants and I don't already have your mailing address, here's how to reach me:
My email address is available on my blogger profile page.
You can also message me on TCDB.
Thanks very much for reading!
at February 27, 2022 12 comments:

These Transformers Cards Never Met My Eye Back in the 1980s

The Transformers hit their stride right as I was in my little-kid, cartoon-watching, action-and-adventure phase. And for a couple of years there, I was really into the animated TV series. If I'm remembering correctly, it was broadcast every Sunday around 10:00 a.m. on WPIX NY channel 11 here in New York, and I'd watch as often as I could with great interest. I also had a few of the action figures, used the red cellophane decoder on the back of the box to find out each one's strengths and weaknesses, and thought I knew the major characters pretty well.
However, at least one product escaped my knowledge until recently, when I saw it on Trading Card Database's "random card of the day" feature. 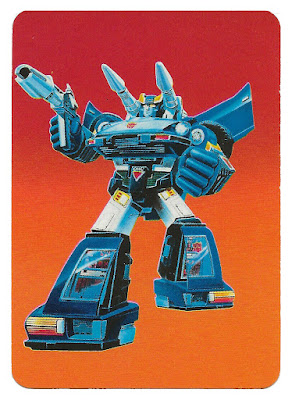 A trading card??
Yep, a trading card. I had a look at the checklist, and the set consists of a whopping 192 cards, plus 24 stickers. There are individual cards for all the major Auotbot and Decepticon players, plus a bunch of cards that are made up of animation stills taken straight from the original cartoon.
For the dose of nostalgia that these cards would bring, I thought I'd have a look around the internet to check prices and availability. Turns out these cards are somewhat rare, which might help explain why I never saw them in stores back in the '80s. Complete sets are a bit too pricey for me, and I don't need that much of a nostalgia hit, so I decided to search for a few singles.
A particular seller on eBay had quite a few listed, and I added a couple to my watch list. The seller soon noticed, and offered me 50% off each of the two cards. With such a generous offer, I asked if he'd provide that same deal if I were to grab a couple others that he was selling. Nice guy that he was, he said it would be fine.
So here are the four cards (two Autobots, two Decepticons) I decided to pick up: First up is Brawn, resident Autobot tough guy and demolitions expert who transformed into a Land Rover Defender 4 x 4. In one episode he quipped at a fleeing Decepticon, Hey, come back! You didn't finish your nickel-plated knuckle sandwich! Next is Huffer, a construction engineer who transformed into a semi-truck cab. His colors are quite bright. I wonder why the studio went with purple and orange like that.
Speaking of colors and design, you'll notice that the artwork on the card fronts is of a higher quality than what you got in the animated series. The metal is more shiny and chrome-like. There's more detail in the lines and depth. 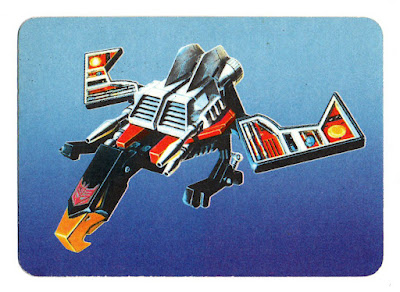 Now we have Laserbeak, who I seem to remember had a role in just about every episode of the cartoon. How could he not? I mean, he was a rocket-powered robot bird who performed covert surveillance, shot lasers from his eyes, and transformed into an audio tape that fit inside the next guy's cassette deck. Yes, for the fourth card I went with Soundwave, for obvious "coolness factor" reasons. A boom box who had a wicked digitally altered voice? Yep. That was a smart move by Hasbro/Takara. I'm sure Soundwave was a best seller at toy stores everywhere.
Now here are the card backs. 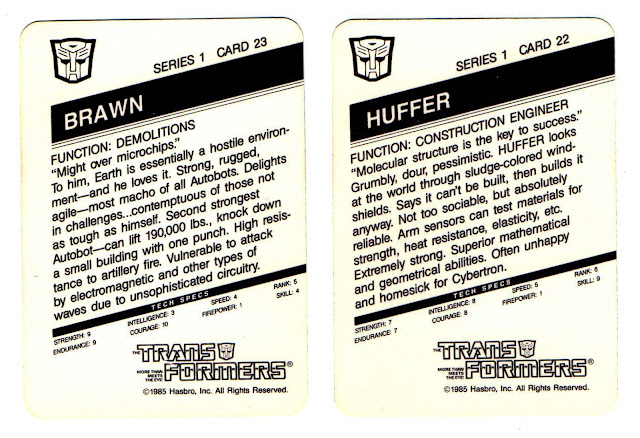 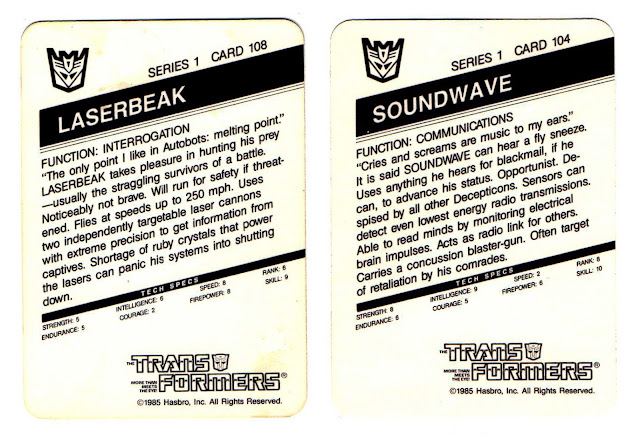 There's quite a bit of detail there, and I can imagine I would have gotten into the show even more had I owned some of these cards back then.
There's also a bit of a Cold War aspect to some of the text, don't you think? I guess you could say the same thing about the entire story line. It was the Autobots (Us) vs. the Decepticons (Them).
As for where you'd have gotten these cards back in the '80s, they seemed to be available as hanger packs sold in retail stores, as evidenced by this image I pulled from the internet. 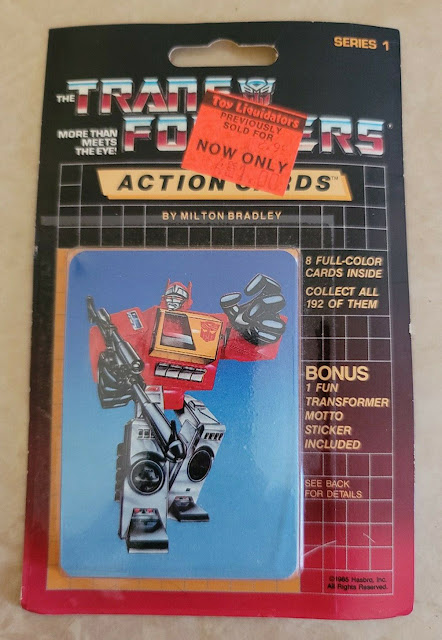 There were 8 cards and 1 sticker per pack. At 192 total cards, it would have been pretty tough to complete the entire set!
So that's that. A few nice-looking cards for my collection, and a big dose of nostalgia.
Have any of you seen these cards before? Any Transformers fans? Favorite Autobot or Decepticon?
Share in the comment section, and thanks for reading!
at February 20, 2022 14 comments: 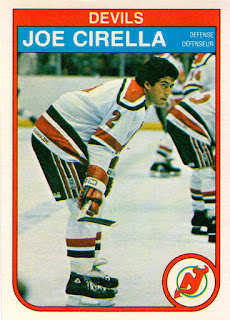 How about a big hand for Joe Cirella! (APPLAUSE)
Now we can't just award him the date with our lovely lady this week, so what we're going to do is bring back two contestants who didn't win their rounds. First, please welcome back Left Wing from the New York Rangers, Don Maloney! (APPLAUSE) 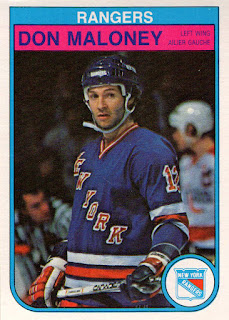 Mr. Maloney was shut out by teammate Mark Pavelich in their round.
Next, please give a warm welcome to Left Wing from the Chicago Black Hawks, Al Secord! (APPLAUSE) 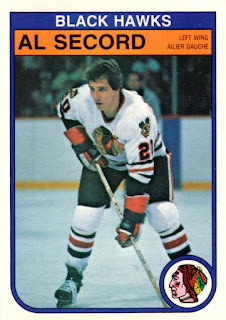 Mr. Secord was one of the unlucky competitors who appeared in the same episode as young Wayne Gretzky.
Now that you're all here, gentlemen, please have a seat on the stage, thank you.

Let's get right to it and find out more about these gents from the back of their hockey cards. 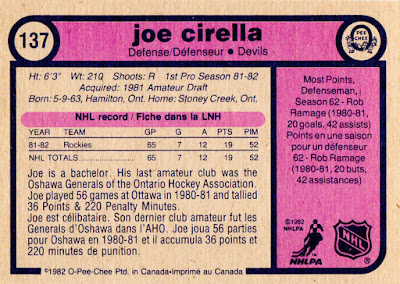 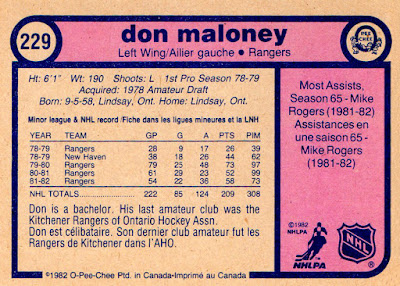 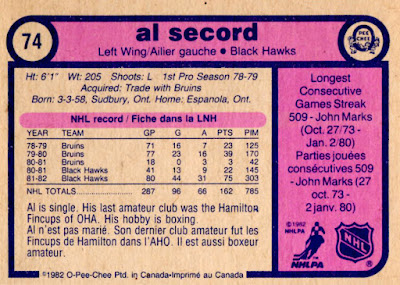 Not much to say from two of the three bachelors. Maybe Mr. Secord's boxing history had them a little worried. Nevertheless, our lovely lady needs a date! Who will it be?
Bachelor number 1: Rookie Joe Cirella, who racked up some big-time PIMs in Ottawa a couple of seasons ago and now finds himself in New Jersey.

Bachelor number 3: Boxing man Al Secord, who tallied a whopping 44 goals and 303 penalty minutes last year.
Cast your votes, and thank you to all the readers and card collectors who participated throughout this series. Your humorous and entertaining comments really made it fun!
If you'd like to look back at any of the episodes, I've created a tab on the menu bar at the top of the blog.
at February 13, 2022 12 comments:

After the lively discussion in the comment section of last week's blog post about David Lee Roth's custom card, Sammy Hagar, and Van Halen, I started thinking about creating another custom card—this time for band mate and guitarist extraordinaire, Eddie Van Halen.
So, I began looking through some images and thinking about a border design. Nothing was really inspiring me until I came across one particular image. It featured Eddie performing at an outdoor venue in the afternoon, smiling that classic smile, using one of his famously designed guitars—all with a beautiful blue sky in the background.
And it all came together. I had to use the 1982 Topps "In Action" template.
Why?
Back in 2020 I'd used the same template for a card that featured another extraordinary guitar player, Jimi Hendrix, also performing at an outdoor venue in the afternoon.
I mean, just look at them side by side on cardboard. There was no other option for me. Two absolute legends of the guitar. Two guys whose sound and style everyone wanted to imitate. I think a lot of folks would put both of them in their top-5 list of guitarists. Maybe even top 2.
And I think they look fantastic together in action. Hope you do, too.
Thoughts? Favorite guitarists? Share in the comment section, and thanks for reading!
at February 06, 2022 14 comments: