A Buffoon from Britain Playing Baseball

Time for another custom card.

Rocky Colavito is certainly not the buffoon from Britain. But he is giant, because the card is a Topps Giant card.

As with many of the other custom cards I've done so far, the original version reminded me of a particular actor. It's something about that face and the slight squint. Is it making any connections for you?

Here are a few hints:

The actor is best known for a TV series in which his character's buffoonery around London is always on full display.

This character doesn't say much, and is often seen in a button-down, necktie, tweed blazer, and brown trousers.

In real life, the actor is quite the car enthusiast. 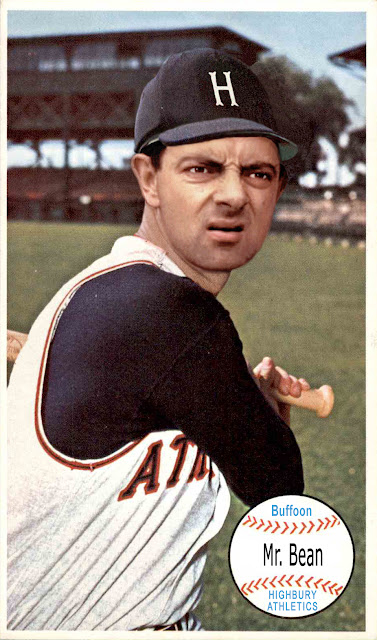 
He's looking more toward the camera than Colavito is, but if you scroll back and forth between the two cards a couple of times, I think you'll understand my line of thought.

The good follow-through that Bean is exhibiting here is not his own, of course. And the idea of Mr. Bean playing baseball in his own Mr. Bean way is pretty amusing, isn't it? That being the case, I've listed his position as "Buffoon." Also note that he plays for his hometown (albeit fictitious) team, the Highbury Athletics. I changed the letter on his baseball cap to match.

Now to the actor himself, Rowan Atkinson. Because he's such a car guy, I figured I'd create a few more customs featuring cars. The first three comprise a series of scenes from a particular episode of Mr. Bean. 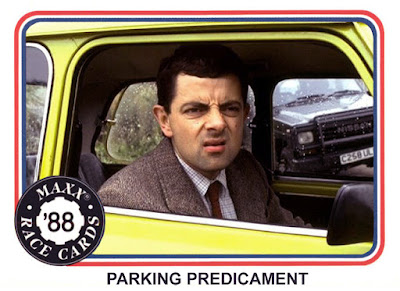 Then, Bean discovers a car of the same make, model, and color as his own parked in a spot marked "reserved". Astonished by the serendipity, he pulls his car off to the side, gets out, and: 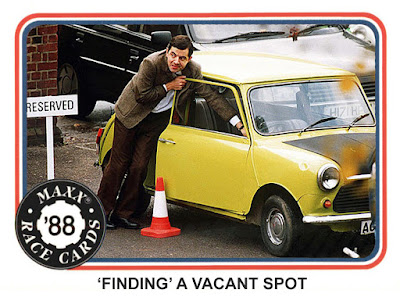 He sneaks over to the twin car, opens the door, and begins pushing it out of the spot. After he enlists (i.e., tricks) two authority figures into helping him push the car farther and farther away from the reserved spot, Bean gets back into his own car, starts it up, shifts it into reverse, and backs it right into the same spot. And then: 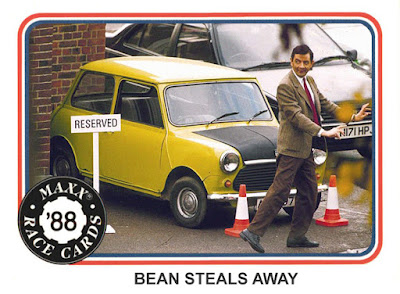 As only Bean can, he exits the scene.

The card template is from the 1988 Maxx set. Horizontal cards in the original set didn't have captions along the bottom, and didn't proceed chronologically, but I think this adds a little humor (and British-ness) to the custom cards. And as you can imagine, it would be more fun to display them in a nine-pocket page this way.

Next is a vertical layout from the same 1988 Maxx set: 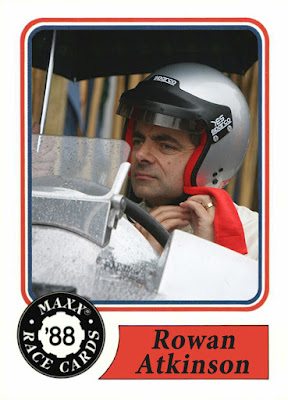 Yep, that's Rowan Atkinson himself, preparing for a road race. I think the red and blue in the border go rather well with the red lining in Mr. Atkinson's helmet.

Anyone out there a fan of Rowan Atkinson? Have a favorite episode of Mr. Bean?