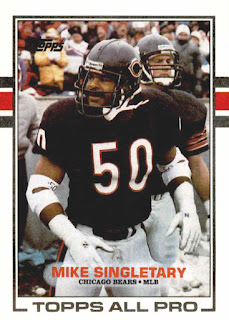 I didn't collect football cards when I was a kid. Dad might have bought me a pack or two when I was very young, but that was about it. I was too interested in baseball—and later hockey—to fit another sport in there, collecting-wise.

Seemed like it'd be a tough ask, but after searching through each year's offering, I found a set I was happy with. And as you can see from Mike Singletary's card up there, it's 1989 Topps.

The set checks all the boxes.


Have a look at Mike Singletary's card up at the top again. If you're an '80s kid like me, what will the stripes on the left and right card borders remind you of? 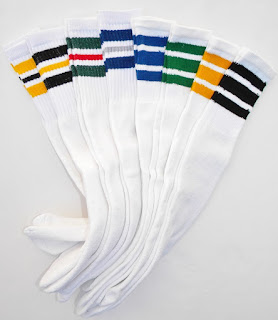 Tube socks! I did have quite a few pairs of tube socks when I was a little tyke. Maybe that's another reason why I gravitated toward this set. (The socks pictured above are not mine, but they sure do look familiar.)

In any case, let's get to the rundown. Here are some of my favorite cards from the set.

It's always fun to see players on telephones. (Look, phones still had cords!) Ronnie Lott's card tells us he's a Topps All Pro, the first of two special designations that we'll see on cards in this set.

Who else enjoys a good parka card? There were a few of those in the '89 set as well.

And here we have Lonzell, Simon, and Bennie reminding us of the importance of pre-game stretching.

Quick break to talk more about the card design: Aside from the tube sock stripes, there's really not much else to it. There's no team logo or banner or anything. You just have a player name in a cloud-like bubble across the bottom, then a smaller-sized team name and position underneath. Other designs from the decade are miles ahead of this one, but there's still value here, as you'll see with the next bunch of cards.

Many of the star players received good action shots. Example number one? Action quarterbacks. At left, Joe Montana warms up on the sidelines. On the right, Jim Kelly tries to get his team off the goal line. As for Warren Moon, I wonder just how deep he went with that throw.

Example number two? Running backs and receivers. There's Bo about to protect the ball and power through some defenders. Mark Jackson is about to snag a pass. (Good technique, Mark.) And Kevin Mack just did snag one—in full stride, too!

Even some of the kickers and punters received nice action shots. Rich Karlis (barefoot!) tries for the field goal, while teammate Mike Horan and L.A. Ram Dale Hatcher prepare to boot one into the stratosphere.

Aside from the action shots, there are some other memorable and/or quirky cards in this set. Here are three of them. Brian Bosworth is looking tough, Chris Chandler is keeping warm, and one of the big rookies in this set, Thurman Thomas, shows us the other special card designation (Super Rookie) as he stretches out before the game.

It is important to note, however, that this is an '80s set, which means there are plenty of cards that feature guys just standing around. The most striking example? Here are four consecutive Buffalo Bills. (Cards 50 through 53.) Oof.

Strangely, Robb Riddick got the blue text treatment for his name instead of the red there. Seems like red would have been more readable against the blue jersey.

The whole thing just bums these next three guys right out.

Pretty good readability with the dark green text atop a yellow background. There were two slightly different designs, which was common for Topps football cards of the decade. On the left, you have the more standard card back that features a blurb along with career stats, season by season. On the right, you have the other design—just a pure blurb with no stat line. Interestingly, it seems like Topps often used the full blurb for players who'd been in the league for years, like Anthony Munoz there.

Returning to the fronts now, with an example of a league leaders card that shows two absolute stud running backs of the decade. Next to those guys, a card commemorating the previous year's Super Bowl champions. 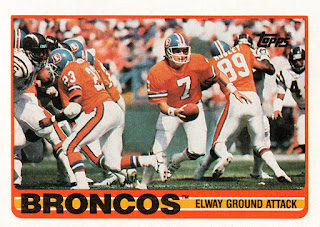 Each team also received a horizontal card that features good action. On the back you'd see a few team leaders at the top (rushing, receiving, etc.) and then the team's full schedule and results from the previous season, week by week. 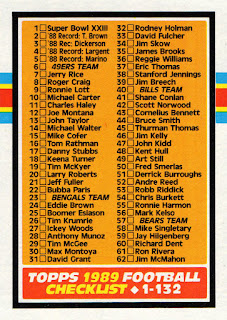 And finally, one of the checklists.

Overall, I do like this set. Many of the stars appear in well-framed action shots, both on their team card and their individual card. The design fits the era, and it's affordable. An excellent entry-level type of set, you might say.

I'm happy to have finished it up, because I think there might be bigger football fish to fry next. Probably another set from the 1980s.

What are your thoughts on 1989 Topps Football?