A Commissioned Custom Card (and a Giveaway)

Since I began printing out my custom card designs last year, I've received a few emails from collectors asking if I'd consider designing and printing a custom card just for them. It's a flattering experience, and most of the time I've taken on the project, even if the subject matter isn't super-exciting to me personally.
I haven't mentioned these commissions here on the blog to this point, but recently I completed a project that I was especially pleased with.
The client asked if I'd create a card of Nancy Wilson, guitarist and vocalist from the rock band Heart, and suggested the 1967 Topps design. That worked for me, as I'd already created a 1967 Topps template when I worked on the El Mariachi and Carolina project, so I set out to find a photo of Nancy Wilson that was just right.
It didn't take long to find one, and I whipped up the card front pretty quickly. As for the back, the client asked if I'd consider creating one that resembled the original '67s, which included two cartoons along with the standard batting record. I said I'd give it a try. After some thought and research, I found two cartoons from the original set that worked pretty well for a rock band, modified the accompanying text, and figured out a substitute for the batting stat section. I like how the stats on the back turned out. Not only do they offer collectors a good look at Heart's discography and greatest hits, but they also provide a similar enough look to the stat lines that appear on a standard baseball card.
In fact, I was so happy with the result that I thought it would only be right to create a card for Nancy's sister, Ann, who is the lead singer in the band. And here's Ann's card back. I used two different cartoons, and also created a separate write-up and stats. Once I finished both designs, I sent the proofs out to the client. He enjoyed the finished product just as much as I did, and gladly purchased a few for his collection, which made me very happy.
But that's not the end of the story. Recently he sent me an email to let me know that he did something special with a couple of the cards. Have a look at what he posted on his social media account: 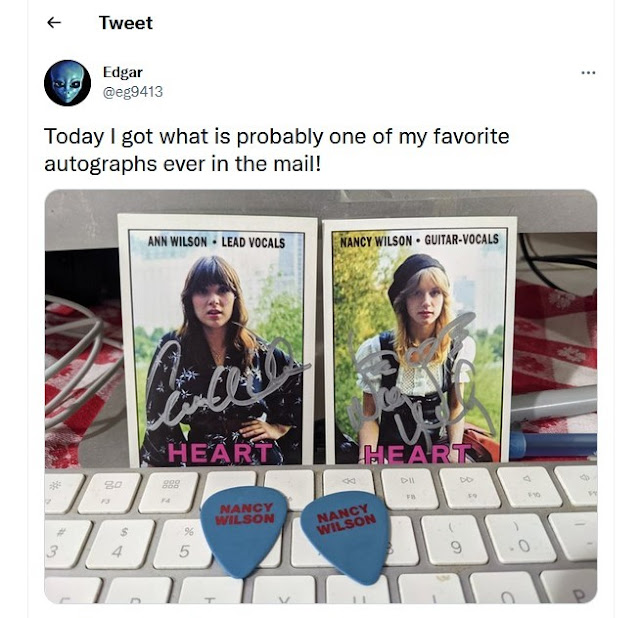 He sent off the cards for autographs!
As far as I know, this is the first time one of my custom cards has been autographed by the person featured on the front. It's pretty cool to think that the legendary Ann and Nancy Wilson actually held my cards in their hands and signed them. Hopefully they enjoyed the designs.
But that's still not the end of the story. I've got some extra copies of these cards, so as usual, I'm going to offer up a few here as a little giveaway.
Just be one of the first three readers to list your favorite Heart song in the comment section, and I'll send you a copy of both cards. (Not autographed, of course.)
If you're one of the claimants and I don't already have your mailing address from a previous giveaway, here's how to reach me:
My email address is available on my blogger profile page.
You can also message me on TCDB.
Even if you miss out on the giveaway, let everyone know in the comment section if you're a fan of the band, and if you've got a favorite song or two.
I look forward to your answers!
at April 17, 2022