Thirty years ago today, a pretty remarkable thing happened in the world of Major League Baseball. Actually, two pretty remarkable things.
That afternoon in Oakland, California, Rickey Henderson stole his 939th base, topping Lou Brock's mark of 938 and setting the new all-time record.
Later that evening in Arlington, Texas, Nolan Ryan baffled the visiting Toronto Blue Jays, throwing his 7th career no-hitter, striking out 16 along the way.
These records didn't go unnoticed by trading card companies.
1991 Leaf managed to squeeze both players into one of their insert sets that very same year.
Smart decision. It also must have been a late decision, because this insert set is titled "Gold Rookies". It consists of 24 rookies, and at the end of the set, with the final two cards, you get Ryan and Rickey.
The following year is when both players received the rest of the recognition.
1992 Donruss gave both players their individual "highlights" cards.
1992 Fleer gave both players their individual "record setters" cards, back to back in the set, which was a nice touch.
1992 Score gave Ryan a special "No Hit Club" card and Henderson a "Highlight" card. The image of Henderson is from the actual record-setting day, which is another nice touch.
In the 1992 Topps set, Henderson got a record-breaker card for the 939 steals, again featuring an image from the record-setting stolen base. Ryan got a record-breaker card too, but it wasn't for the no-hitter. It was for 22 straight seasons with at least 100 strikeouts. (Side note: Wow.)

1992 Upper Deck missed the boat on Ryan, but gave Henderson a Diamond Skills card ("Best Baserunner") that showed him lifting third base in the air triumphantly after stealing #939, and mentioned the record in the write-up on the back.
And don't get me wrong, it's all fine and good that so many baseball card companies recognized Ryan and Rickey for their accomplishments. But both players set their records on the same day, for goodness sake. How often does something like that happen? Hardly ever, I'd guess. And none of the card companies documented that aspect of it.
So, to commemorate such a great day in baseball, I thought it would be fun to give Rickey and Ryan a combination "Highlight" card like the ones featured in the 1984 Topps set. 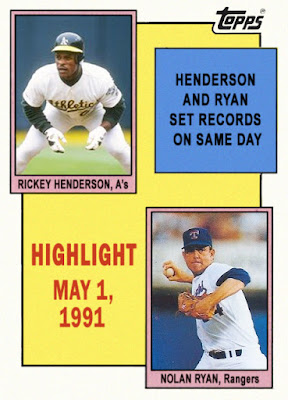 And here's the card back. 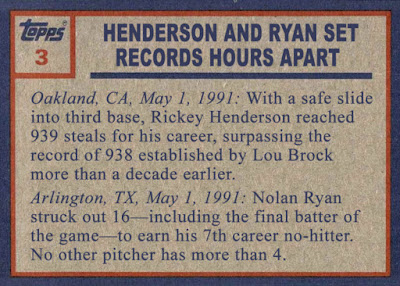 This has turned into a little series, as I've already used the 1984 Topps Highlight template for two other custom cards (Joel Youngblood's amazing feat and a Beastie Boys highlight). I think I might keep it going. Not only are the cards fun to do, but they give me a chance to write some press-style blurbs on the back.
Thanks for reading, everyone.
at May 01, 2021