I first noticed this card a few months ago on Bo's blog, Baseball Cards Come to Life! 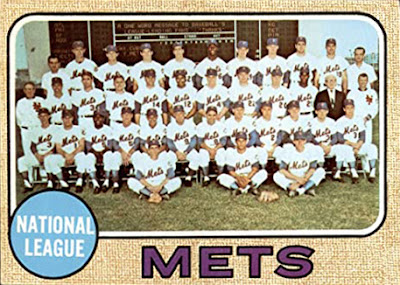 In that blog post, Bo (a.k.a. he of the eagle eye) directed our attention to the scoreboard in the background, where in small letters it reads as follows:
A ONE-WORD MESSAGE TO BASEBALL'S LEAGUE-LEADING FANS: "THANKS"
It was an important message. Over the first few years of the franchise's existence, those fans endured some pretty rough win-loss records. (40-120, 51-111, 53-109, 50-112, 66-95, and 61-101)
However, in 1968, the year this card was printed, things looked slightly better. The Mets ended up with 73 wins, the most they'd ever posted. And although it meant another finish toward the bottom of the standings (they edged out Houston by one win to avoid last place in the N.L.), the fans continued to stick around. Good thing, because the very next season their team would go on that miracle run and become World Series champs. Who could have guessed?
But forget about all that for a moment, and have a closer look at the card again—specifically the three guys in the front row.
I like how they're sitting cross-legged on the grass with their hands clasped in front of them and their mitts on the ground. Place a homemade sign between them featuring the team name and a local sponsor, and it would be a scene right out of my 1980s Little League days. (The first sponsor I remember having was "Madeo's Plumbing". The company name was silk-screened proudly across the foam-paneled fronts of our mesh baseball caps.)
Really, all that's missing from the scene is someone's mom walking out of the dugout with fresh orange wedges or paper cups filled with fruit punch. Toss an ice cream truck in the parking lot, and everything would be right in the world again.
And I'd like to think that, despite hovering near the bottom of the standings yet again when this team photo was taken, at least some of the Mets on that card had similar good feelings. They were playing baseball for a living, after all.
For the care-free days of Little League, playing baseball with your friends, and loving it regardless of wins and losses, 1968 Topps #401 has a spot in my box of favorite cards.
at May 09, 2021