A series where I post some thoughts about favorite cards. 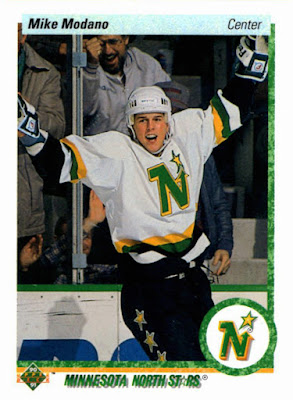 A year after the smashing success of their inaugural baseball card release, Upper Deck followed with a hockey set. And similar to their baseball set, the photography in the hockey set did not disappoint. (See also #47 Theo Fleury, #64 Ray Bourque, #91 Mario Gosselin, #176 Viacheslav Fetisov.)

You know who else didn't disappoint in his inaugural season? Mike Modano. In 1989-90, the smooth-skating, fiercely talented American impressed with 29 goals and 46 assists for a total of 75 points. Minnesotans knew they'd done well drafting Modano in the first round in 1988 (first overall), and the image on this Upper Deck card provides an early example of just how much he'd take the state by storm.

Not only is the photo perfectly framed, and not only does it capture Modano coasting along the boards, celebrating a goal with arms raised (and showing that classic North Stars logo), but check out the guy in the background behind the glass. 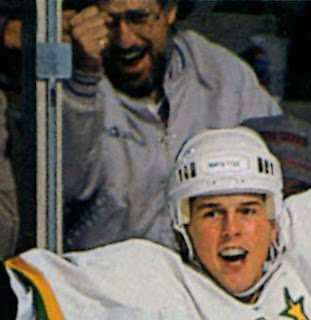 Mike Modano elicited this reaction from the home crowd for 4 seasons in Minnesota, then for another 16 in Dallas (and then one in Detroit). He's still the all-time goals and points leader among American-born players.