This is my second blog post in a month that features modern cards.
What's going on here?!?
Well, like many of you collectors, I occasionally enter a contest that's held by a fellow blogger, YouTuber, or collector. And recently I actually won one of those contests!
It was put on by Brent, who has a YouTube channel called Brent's Card Breaks. The only thing you had to do to enter the contest was to like the giveaway video, add a comment to the video, and subscribe to the channel. Easy enough.
Well, the date of the contest arrived, Brent spun the digital wheel with the names of all the entrants on it, and wouldn't you know it? "Nine Pockets" came up as the winner.
It was a generous prize package. Have a look at the team bags that recently arrived in my mailbox. 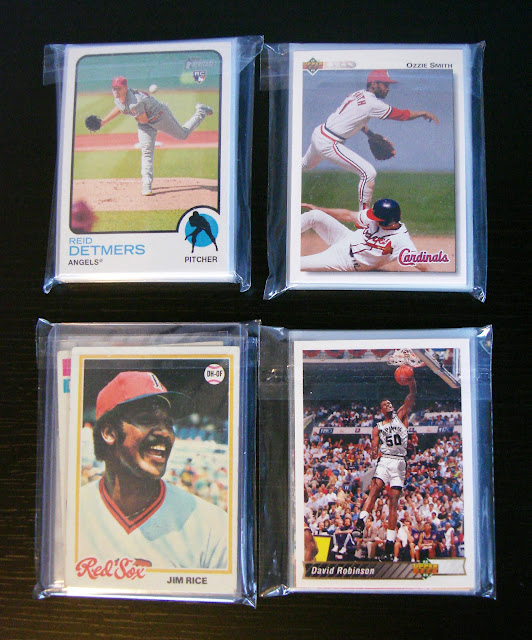 Modern baseball, '90s baseball, vintage baseball, and some random basketball cards added as a bonus.
Here are some of my favorites in the bunch.

Kelenic is trying to make his way back to the MLB. Detmers pitched a no-hitter in May of this year, but struggled with consistency and was sent to the minors in June. He's back with the big club now. As for Hayes, he's holding his own in Pittsburgh.

And here we have autographs from two prospects. Agrazal pitched a number of games for the Pittsburgh Pirates back in 2019, and is currently a minor-league free agent who last played with the Amarillo Sod Poodles (Double-A). Ottenbreit is playing Single-A ball with the Clearwater Threshers, and is currently injured. Let's hope both of those guys can get back on their horses soon! On the right is a fancy 2019 Chrome Black Refractor of Corbin Martin on the 1984 Topps design, serial numbered /199. Martin currently pitches for the Diamonbacks, and collected his first career hit in June.

Some nice vintage is up next, with a 1976 Topps victory leaders card, a smiling Jim Rice on the 1978 issue, and a Lee Smith Donruss rookie!

Jim Rice is a little more pensive here on his 1986 Fleer Star Sticker, Reggie is still swinging hard in 1987, and Frank Thomas is very happy on his 1990 Score rookie card, possibly because he knows how happy I am to have it in my collection.
All in all, a great prize. Big thanks to Brent at Brent's Card Breaks. If you enjoy watching wax packs being opened, especially those from the '80s and '90s, please do stop by his channel.
And that raises a question: Do any of you readers and collectors watch trading card channels on YouTube? There are definitely some great content creators out there, including our good blogging buddy shoebox legends.
Share some of your favorite channels in the comment section, and thanks for reading as always!
at September 18, 2022