Battle of the Bands, US Semifinal 2: KISS vs. Ramones

Earlier this year, The Rock Universe whisked me away to a mysterious time and place to witness a battle of the bands of unparalleled greatness. I documented the experience, and now I'm sharing the battles here on the blog. Today we've got the next matchup of the tournament: KISS vs. The Ramones. Here's how it went. I returned to my seat, really looking forward to this matchup. I'd actually seen KISS perform live a couple of times back in the '90s during their Alive/Worldwide tour, and it was a fun experience. I imagined it would only be better here.
Even with the house lights off, it was easy to split up the crowd this time: Lots of painted faces from the KISS Army, and lots of ripped jeans and black leather jackets from the Ramones faithful.
Just then, a familiar voice yelled out across the PA system from the darkness:
YOU WANTED THE BEST AND YOU GOT THE BEST... THE HOTTEST BAND IN THE WORLD... KISS!
The stage lights went up, and KISS went right into their hit song, "Detroit Rock City".

The crowd roared at the four costumed icons as they blasted the arena with distortion and explosions. It was like a leadoff hitter drilling a home run on the very first pitch of the ballgame.
The song ended with more pyrotechnics, and the crowd roared even louder. Once the noise subsided a little, Paul Stanley began to address us all, asking how we were feeling, and if we were ready to rock. But before he could finish the sentence, another voice yelled out from the other stage, still in shadow:
ONE TWO THREE FOUR!
It was Dee Dee Ramone. And his band had jumped right into "Blitzkrieg Bop" 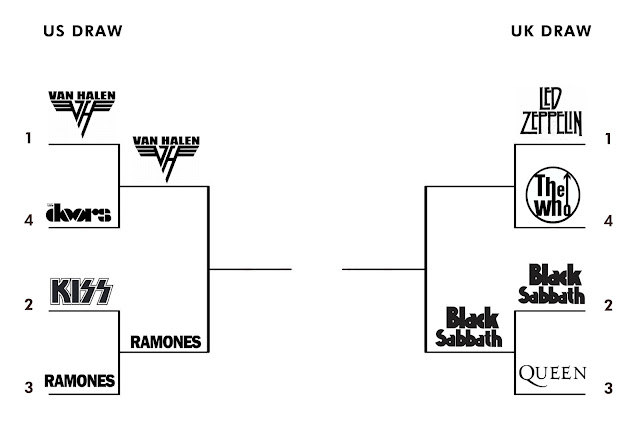 Next week it's back to the UK section of the draw for the final first-round matchup: #1 seed Led Zeppelin versus #4 seed The Who.
Which band are you going with?
at July 03, 2022