I Didn't Beat the Streak (But Here's a Giveaway Regardless)

During this past baseball season, I played a fun online game offered by MLB.com called Beat the Streak.

To participate, you simply need to look at all the games being played on the current day’s schedule and select one player you think will hit safely in his game. If he gets a hit, your streak is at 1. For the next day’s schedule you repeat the process, hopefully extending your hit streak to 2.
The goal is to string together a streak of 57 hits with the players you choose, which would, in a virtual sense, surpass the legendary 56-game hitting streak that Joe DiMaggio established in 1941. It would also unlock your grand prize of 5.6 million dollars. Wow.

There's also a "double down" feature that allows you to choose two players per day, if you're feeling spunky.

In the 20 years since the game's inception, no one has beaten the streak. Back in 2012, one player managed to take his streak all the way up to 51 games. Then in 2015, another player hit 51. But that's as close as anyone has come. Usually, pushing your streak even as far as 25 or 30 games is considered exceptional, and would likely rank you in the top 100 out of tens of thousands of participants. (This year there were more than 100,000 registered participants.)

And that's what makes the game so perplexing. With all the players to choose from and all the data available on hitters and pitchers, you’d think you’d be able to find at least one or two “locks” every day. But if you know baseball, you know it doesn't exactly work that way. A hot hitter can belt a line drive in the gap that's caught by a diving outfielder, while a guy who's gone hitless in his last 15 at-bats will send a blooper off the trademark that somehow carries just enough to fall between the second baseman, first baseman, and right fielder for a base hit. I’ll share one example from my past season. 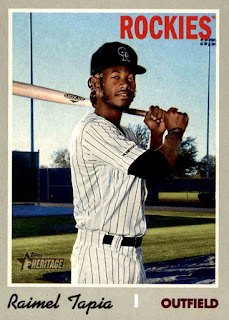 Here’s outfielder Raimel Tapia. Before June 23, 2021, I didn’t know anything about him. But on that day, I logged in to my Beat the Streak account and discovered he was riding an 18-game hitting streak, was batting over .300, and his team was facing a cold pitcher whose ERA was close to 6.00. So I selected him as my hitter.

And what did Mr. Tapia do in his five trips to the plate?

So just like that, Tapia's hitting streak was over, and I was back to zero.

It’s still a fun game, though. And for me, a person who doesn’t collect modern cards or follow teams around the Majors too closely, Beat the Streak provides an opportunity to learn about some of the game’s talented young hitters, like Raimel Tapia and these next few guys, who I ended up picking rather often throughout the season. (Thanks to the Internet for providing the images.) 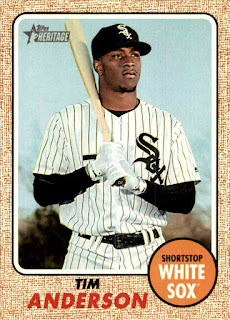 Across his past three MLB seasons, Tim Anderson has batted well over .300. In fact, he led the league with a .335 batting average in 2019. The talented infielder scores a lot of runs from the top of the lineup, and will put up about 15 or 20 stolen bases per season, too. Let's have more stolen bases in baseball, please. 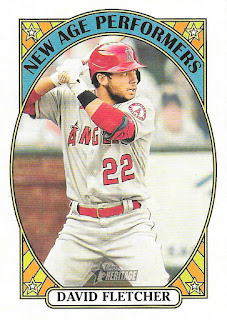 Trout and Ohtani receive most of the attention in Anaheim, and rightly so. But David Fletcher wields an impressive bat, too. He'll collect more than 150 hits per season, and over this past summer he ran a hit streak all the way up to 26 games. Toward the end of the season he really cooled off, though. 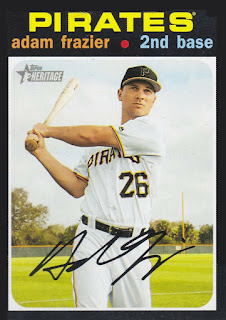 Adam Frazier had quite a hot start to the 2021 season, putting up more than 100 hits by the halfway point and making the N.L. All-Star team. He was traded to San Diego in July and his hitting slowed down through August, but he really picked it back up in September, batting .325 for the month. 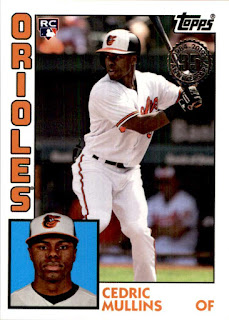 Cedric Mullins really broke out in 2021, making the A.L. All-Star team. He hung around the top few spots on the hit leaderboard for most of the season, and put up a solid amount of doubles and home runs. Quite a few stolen bases, too.
Back to the game now. What makes it that much more fun is that even if your streak doesn’t get anywhere close to 57 games (mine topped out at 18), MLB still provides you with a prize of some kind every time your streak reaches 5-game intervals. The prizes aren’t much, but include things like a 15% discount at MLBShop.com, a free week-long subscription to MLB.tv, or one entry into a contest that offers a trip to the World Series as the grand prize.

And there’s another prize that sometimes appears: A code you can enter on the Topps BUNT website to redeem a special pack of Beat The Streak digital baseball cards. I won five of these codes throughout the season.

I don’t collect modern cards, and it thereby follows that I’m not exactly interested in collecting virtual versions of modern cards, so I’m going to offer my Topps BUNT codes as a little giveaway here. Just be one of the first five people to say something like “I WANT A CODE!” in the comment section below, and I’ll email a code to you. (One per person, please. Codes expire on 12/31/21.)
It's yet another little way of thanking all of you for spending some time here at Nine Pockets.
If you're one of the claimants and I don't already have your email address, here's how to reach me:
My email address is available on my blogger profile page.
You can also message me on TCDB.
So, have any of you played Beat the Streak? If you have, what’s your longest hit streak? Maybe next baseball season we’ll get a little competition going among bloggers.