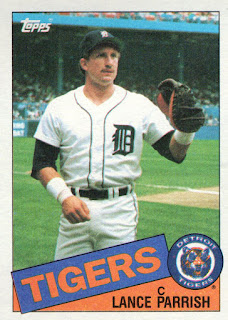 The two big collecting years of my baseball childhood were 1984 and 1987. Both years I collected Topps, and Topps alone. (Mainly because those were the packs my dad bought for my sister and I.)
And although 1985 falls in between those two years, somehow I didn't collect many cards that year at all.
And that's too bad, because the 1985 Topps baseball set, as I discovered while compiling all the cards recently, is a bit more unique than some of the other sets of the decade.

Firstly, it's the design. As you look through the cards below I think you might agree that it's better than average. The cards are bright. Bold. Fun. And on top of all that, the colors are very well matched to each team's colors. That's a departure from the previous few years, when Topps chose colors that sometimes provided a nice complement to the team's colors, and other times did not. (For example, 1980 Topps Pirates cards received a purple and orange combo, while 1982 Topps Cardinals cards were hit with magenta and brown.)
Along with the design, another reason I like this set is that the images provide ample evidence that it was issued smack-dab in the middle of the 1980s.
There are the bespectacled players.

And the bearded players.

And more than enough mustachioed players.

Choking up on the bat was such a common thing in the 1980s that players even worked on it during batting practice, as Dan Gladden demonstrates quite nicely.

The uniforms are also a great indicator of the decade.

And if not the uniforms, consider the warmup jackets.

But that's not all the 1985 Topps set has to offer. Most surprising to me is that there are quite a few cards that portray fierce action.
There are pitchers who are straining to their limit.

And hitters who are absolutely swinging out of their shoes.

Through it all there are the steady infielders, ready for any smash that comes their way.

Some of the stars have cool-looking cards.

Reggie: You're the man, Dickie!
Dickie: No Reggie, YOU'RE the man! 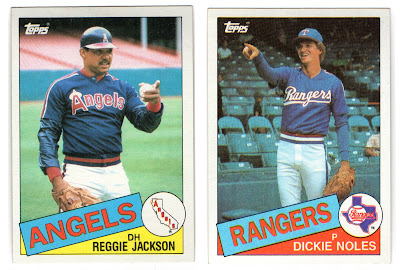 Now let's go to the subsets, which are also fresh and different.
There are 10 record-breaker cards in this set, which is the most of any set of the decade.

Here's a nifty #1 Draft Pick subset, featuring cards of some notable #1 picks from the previous 15 years or so.

And an example of a card back. Not the easiest color combination for readability, but I do like the trivia questions that appear on some of the cards like this one. 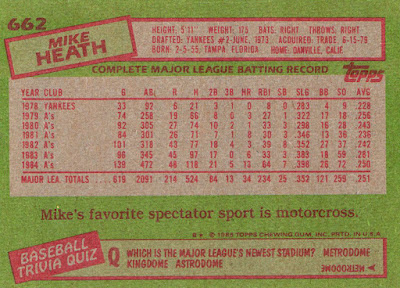 Finally, here are two versions of the "Winning Pitch" game card Topps issued that year (one per wax pack), plus an example of a checklist.

And there you have 1985 Topps baseball. It's a nice-looking set. Bright. Colorful. Bold lines. The cards look good in nine-pocket pages. It's also quite affordable—even more so if you've already got the "big three" rookie cards. I'm very happy to have completed this one.

What are your thoughts on the set? Share in the comment section, and thanks for reading, as always.