Today's post features one of the many boxed sets of baseball cards that were released by retail outlets during the 1980s. (And featured by bloggers lately.)

Toys "R" Us, K-Mart, Woolworth, Hills, Eckerd Drug Stores, Kay Bee Toy Stores—and I'm sure I'm missing a few—all issued these small sets of 33 or 44 cards, featuring the stars of the game, complete in the box.

But I only acquired this 1987 Kay Bee set a couple of months ago, and it wasn't a "new in box" purchase. I picked up 25 of the 33 cards in a trade, and over the next few weeks I found a couple of other trade partners who had the remaining 8 cards available. Done. Neat and tidy.

Interesting thing is, I don't remember ever buying baseball cards at Kay Bee Toy Stores. I hardly remember even seeing any trading cards there.

What I do remember is that there was a Kay Bee location about 10 minutes from where I grew up. They had rows of toys, action figures, dolls, stuffed animals, and board games. And one particular row of their store was devoted to something else: model kits. There were cars, planes, boats, and other vehicles, along with a rack filled with tiny jars of Testors paint—every color you could imagine. I think that's the only thing I remember bringing home from Kay Bee. An occasional model airplane, and some olive drab paint.

In any case, compiling this set all these years later was pretty fun. And because there are only 33 cards, I'm going to show them all, three at a time. Here we go.

According to the back of Jesse Barfield's card, he led both leagues with 40 home runs in 1986. That surprised me.

The blurbs on the card backs in this set often contain great information. Did you know Wade Boggs won the A.L. batting title three times in his first five seasons? That's really impressive. His career batting average to this point? .352

That's a great shot of Jose Canseco taking batting practice with a couple of other players looking on. These Kay Bee cards are glossy, and have a heavy card stock similar to the glossy All-Star inserts that Topps put out during the 1980s.

There's Roger Clemens in the classic pitcher's pose, and Vince Coleman doing what he did best.

Dwight Gooden and the Mets were coming off their World Series victory. This is one of the Gooden cards that I really like, because it shows his terrific form and balance. (Not to mention a shot of the classic spring training uniforms.)

There's Rickey hitting a line drive somewhere, possibly at Wally Joyner, who looks like he might be at Yankee Stadium.

Don Mattingly looks like he may have just barely gotten under one, while Jack Morris is busy winding up. Let's allow Morris to show us what the card backs in this set look like: 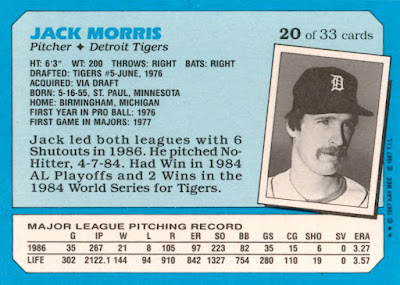 Wow, a picture on the back! Good stuff, Kay Bee. Pretty impressive blurb there, too. It provides a nice reminder of Morris' 1984 playoff and World Series accomplishments.

Another note on the card backs: When I first began looking through these cards, something that surprised me was the lack of any Topps logo. I did find an image of the original box these cards were packaged in, which features the logo at the top left in small red letters. But other than that, nothing on the cards themselves. Even the tiny copyright line on the right-hand side of the card back doesn't contain the name "Topps". There's a Kay Bee copyright, followed by a second copyright for "T.I.L."

In any case, I certainly don't mind the lack of a Topps logo. The card fronts look great to me regardless. So let's get back to it.

There's Tim Raines looking like he'd thought about a bunt, but then didn't like the pitch and pulled it back. Dave Righetti is one of only six pitchers featured in the set, and he earned it with 46 saves the prior season, at one point converting 24 consecutively.

The back of Mike Schmidt's card tells us that he's either led or tied for the N.L. lead in home runs eight times. The angle on Mike Scott's card makes it look like he's tossing that ball eight rows behind home plate.

Closing it out with two big hitters following through, and a pitcher who brought about mania in 1981. Fernando mania.

And that's it. A neat little set that couldn't have cost more than a few bucks back in 1987. Thanks for flipping through it with me.