This Custom Card is Going Straight to the Principal's Office

Over the past few years I've created some custom cards featuring dudes who many would consider troublemakers. Harry Callahan, Logan (a.k.a. Wolverine), Rick Vaughn, El Mariachi.
But never have I featured three on the same card like this: 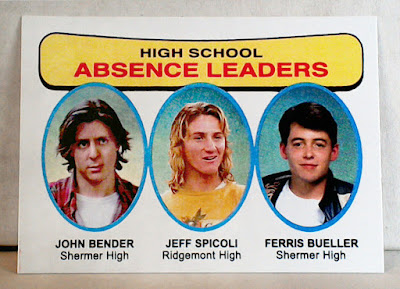 I mean, just look at those guys. You know it's only a matter of time before they'll be sitting in detention.
The card is based on the 1971-72 Topps hockey "leaders" design. The subset featured goals, assists, and points leaders from the previous season, along with goalie wins, shutouts, and goals against average leaders. And although a penalty minute leaders card wasn't featured in that set, a few other hockey sets in the 1970s did include one, and that notion of three miscreants on a card provided all the inspiration I needed. I really like the bright yellow color bar and big, bold red text that runs across the top, as well as the look of the player images inside the blue ovals.
But that's not all. I also designed a card back. 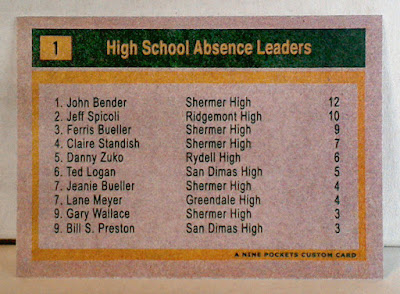 I figured Bender would be the overall leader in absences, followed by Spicoli and Bueller. Note specifically how many absences Beuller has. Fans of the film Ferris Bueller's Day Off will know exactly why I chose that number.
Principal Rooney: So far this semester he has been absent niiiinnne times.
Ferris' mom: Niiiinne times?
Principal Rooney: Niiiinne times.
Ferris' mom: I don't remember him being sick niiine times.
Principal Rooney: That's probably because he wasn't sick. He was skipping school.
Of course that number would suddenly be reduced to 2, right in front of principal Rooney on his computer screen, but we all know 9 absences was the actual number.
To fill out the top 10 on the leaderboard, I added a cast of characters from other films that revolved around the high school experience, such as Danny Zuko from Grease, Lane Meyer from Better Off Dead, Gary Wallace from Weird Science, and both Bill S. Preston and Ted Logan from Bill and Ted's Excellent Adventure.
Sharp-eyed card collectors might notice that quite a few of these ne'er-do-wells, slackers, and mischief makers attended the same high school—Shermer High—even though they appeared in different films. That's because filmmaker John Hughes was the man behind quite a few of those iconic movies, and he used the same high school name each time.
I really wanted to get Chris Knight from Real Genius onto the list, but it turns out the school in that film was a college, not a high school. I also thought about adding a couple of characters from Parker Lewis Can't Lose, but that was a television show, while all of the other characters on the card are from feature-length films. So I decided against it.
Regardless, I had a lot of fun designing this card, and I hope you're getting a big kick out it.
Do you have a favorite high school–themed movie? Favorite character?
Share in the comment section, and thanks for reading, as always!
at November 20, 2022